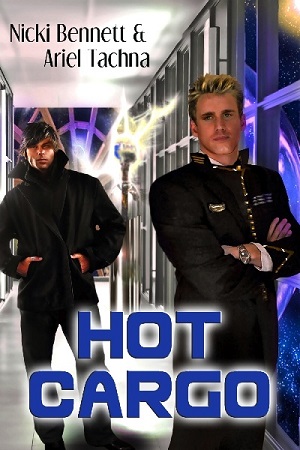 Blurb: Captured and accused of piracy, privateer Blaise Risner, captain of the Golden Stallion, finds himself in a clinch – literally – with Confederation Admiral Peter Keller, who promises to see justice done by way of hard labor. But when the chemistry between them rivals the heat of the twin Talixin suns, the dominant admiral decides he wants to handle the rehabilitation of the provocative pirate himself. After their first close encounter, Blaise figures that serving Keller in such a personal capacity won’t be such a terrible sentence.

Keller dispenses his own forms of painful justice and sensual discipline, which usually involve a not-so-resistant Blaise on his knees bound and determined to give as good as he gets. The privateer can’t deny that suffering the handsome admiral’s punishments makes him burn like the fires of the Horsehead Nebula. Serving in the roles of prisoner and captor defines their ‘relationship’, but no power can stop a shooting star … the star of startling passion that flares every time they touch.

Just when Blaise thinks he can navigate the treacherous asteroid field of emotion to find common ground with Keller, an interstellar war tears them apart. Through it all, Blaise’s desire for his captor stands as tall and strong as the monoliths of Maraven, and he’ll go to the very edge of the galaxy and back if that’s what it takes to crack the ice around the admiral’s heart.

Review: Peter uses his position to use Blaise as he see’s fit which did not sit well with me. Blaise is accused of piracy. Seeing no way out of it he makes a deal with Peter to serve out punishment as he see’s fit.

Peter seemed a bit too aggressive to me. I did not really care for his attitude toward Blaise then all of a sudden he changes his tune.

This story fell flat for me. I wanted to like it but could not due to Peter as I did not care for him as a character at all.