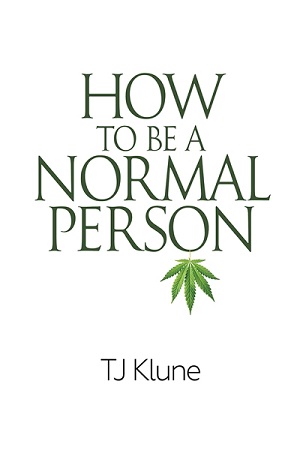 Title: How to be a Normal Person

Blurb: Gustavo Tiberius is not normal. He knows this. Everyone in his small town of Abby, Oregon, knows this. He reads encyclopedias every night before bed. He has a pet ferret called Harry S. Truman. He owns a video rental store that no one goes to. His closest friends are a lady named Lottie with drag queen hair and a trio of elderly Vespa riders known as the We Three Queens.

Gus is not normal. And he’s fine with that. All he wants is to be left alone.

Until Casey, an asexual stoner hipster and the newest employee at Lottie’s Lattes, enters his life. For some reason, Casey thinks Gus is the greatest thing ever. And maybe Gus is starting to think the same thing about Casey, even if Casey is obsessive about Instagramming his food.

But Gus isn’t normal and Casey deserves someone who can be. Suddenly wanting to be that someone, Gus steps out of his comfort zone and plans to become the most normal person ever.

After all, what could possibly go wrong?

Review: I am going to be totally frank from the outset: I am ever so slightly a massive fan of TJ Klune’s novels. I have now decided that I have a personal definitive rating of TJ’s books and this one falls second, behind Bear, Otter and the Kid (series). For the sake of all our sanities, I am not going to gush further about how awesome all of TJ Klune’s books are.

Like other books by the author, this is full of hilarious descriptions of other characters/situations, a lot of laugh out loud conversations and enough feelings to send the reader on an emotional roller coaster.

So… How to be a Normal Person… Like all of TJ Klune’s books this is a quirky but thoroughly relatable look at how two guys who are poles apart in personality can get together and fall in love. The story is mostly told from the POV of Gustavo Tiberius – aka Gus. Gus struggles with his social skills and before the death of his father; his father was also one of his only friends and his link to the rest of the world. In the small town he calls home, Gus has a very settled life with a set routine. He also has some interesting acquaintances, including a cafe owner obessed with alliteration and three lesbians who may or may not be sisters that are the sole members of the town’s vespa gang. Then there is Casey – the asexual stoner hipster who turns up in town to work for his aunt, the owner of Gus’s local cafe. It doesn’t take Casey long to realise that Gus is a bit of an oddball (which we learn more about through some of Casey’s POV sections). He’s a scruffy looking surfer dude that sounds very yummy and very sexy!

Both these guys are relatable and the attraction is both sweet and sexy. Yes, with Casey being asexual there is not a lot of physical love in the book. However, there is a very gentle and passionate romance coming to life within the pages that is not dependent on the characters having sex with each other. It is very clear that both of the guys bring something that the other needs in his life.

My heart ached for poor Gus. I really connected with him. I suppose that is because, partially, I can recognise some of his anti-social behaviours and also because we get a couple very important lessons here. The lessons being that you can pretend to be someone else but it is not necessarily going to make you happy or feel good within yourself. I hate that Gus needed to “be a normal person” so that he could be with his asexual stoner hipster, Casey. Seriously, I want to give Gus hug even though I think I know his character well enough to imagine the reaction!

If you have followed the author’s blog, you may know that this is a somewhat personal book and he is ready to explain what it is to be asexual for those of us who do not understand. In this situation, I have to say that I love Casey. He is just a lovable ball of energy and happiness. Although he doesn’t get pleasure from sex, he is ready with a hug to brighten the day of everyone around him. Isn’t that just the most awesome type of person?

As a bit of a teaser, while some of Gus’s flash backs to conversations with his father are both sweet and at some points very sad, they were also quite funny. Then there are the “recorded phone calls” with his internet provider – OMG, so funny, I loved the book for those few bits of dialogue alone.