Hi guys! We have C.B. Conwy stopping by today with their new release How to Domesticate a Russian Bear, we have a great excerpt and a brilliant giveaway so check out the post and enter the giveaway! <3 ~Pixie~ 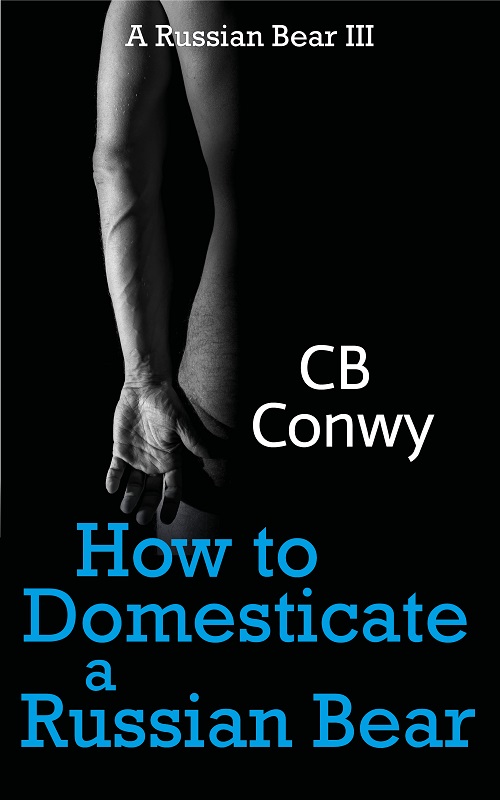 How to Domesticate a Russian Bear

(A Russian Bear III)
by

So, all Mischa really wanted was sex. Hot, kinky sex, and preferably lots of it.

But then he got a sub, and then the sub turned into a fiancé, and now apparently Mischa is supposed to settle down and be all domesticated. However, Mischa does not do tame.

Well, at least he didn’t use to. Now he’s beginning to think that yes, he does indeed do tame. Unfortunately, his sub doesn’t seem to get that.

Tom knew that Mischa was a handful. Hell, that’s basically what made Tom fall head over heals for him. But figuring out how to handle his postgraduate studies combined with a long-distance relationship is driving him nuts. And not in the great, Mischa-is-torturing-me-with-kinky-sex-toys way (even though that happens, too. A lot). More like in the this-is-killing-me-slowly-and-I-don’t-know-what-to-do-about-it way. Unfortunately, Mischa finds out and puts his foot down, and then suddenly Tom has some very hard choices to make.

Then there’s Mischa’s busybody bridezilla friend, karate practice with people who actually hit back, and the arrival of the inlaws. Because just what do you do with the finest privately owned dungeon in North America when your family turn up?

That’s when Tom realizes that domesticating a Russian bear may take more work than even he realized. How to Domesticate a Russian bear, (A Russian Bear III), CB Conwy

Tom was using all his willpower to keep his steps calm and measured as the cab drove off behind him; desperation was never a pretty sight, even though he most of all wanted to sprint up the driveway stretching in front of him.

Finally he stood in front of the door. He took a deep breath, trying to compose himself, and reached up to knock at the door.

Before his hand made contact with the dark wood, the door was flung open and he was pulled into an embrace so tight that he couldn’t breathe. For a moment, he was shocked; then his brain registered the scent of Mischa, and Mischa’s arms around him, and he gave up on any pretense of being stoic and mature and simply clung, breathing in deeply and finally, finally indulging in the feeling of being back in Mischa’s arms.

He’d envisioned this meeting pretty much every single day since they’d parted. He’d pictured Mischa kissing him, Mischa having kinky plans that started right on the doorstep, Mischa bossing him around.

He hadn’t imagined this desperate clinging. Mischa held on so tightly that it felt like Mischa’s arms and Mischa’s body were his entire world.

He hadn’t imagined, either, the way Mischa was hiding his head against Tom’s shoulder, and he certainly hadn’t imagined the labored breaths that sounded suspiciously moist. Tom gently let one hand slide through Mischa’s dark hair, rubbing softly, comforting.

Then he realized why he was whispering and pulled a little harder on Mischa’s hair. “But you could consider letting me breathe sometime soon. It would probably be good for my health.”

Mischa mumbled something, and his arms loosened slightly.

Mischa finally lifted his head. His eyes were somewhat shiny, and Tom would bet that his shirt would be slightly damp where Mischa’s face had been. “I said, ‘you sarcastic little shit’.”

Tom barked out a laughter. “Jesus, Mischa, you’re such an asshole. I had completely forgotten…” But then Mischa’s lips were on his, and any coherent thought promptly left his head.

Mischa’s lips were soft, almost searching at the beginning, the tip of his tongue gliding gently over Tom’s lower lip. Then, when Tom eagerly opened up – it was Mischa! – he embraced Tom tightly and took his mouth so thoroughly that Tom could do nothing but surrender to the feeling of finally, finally being this close to Mischa again.

He might have made a needy sound. He did know that he wasn’t just clinging anymore, he was crawling up Mischa until his legs were around Mischa’s body and Mischa was holding him tightly. They were moving, he thought, but he was tasting Mischa, surrendering to his tongue, opening his mouth to let Mischa plunder it however Mischa wanted to take him.

Then they were sitting somewhere, on a couch, Tom thought, and Mischa pulled back slightly, gently holding Tom’s head in his hands. “I’ve missed you,” he said, his voice sounding slightly gruff.

“I’ve missed you, too. God, Mischa, what were we thinking with the whole ‘Tom’s got to settle in so Mischa can’t visit’ thing? That was really, really stupid!”

Mischa nodded sagely. “It was stupid. Very.” Then he bent forward and kissed Tom again. Their lips met, and their tongues slowly explored what they hadn’t had for so long: The intimacy of two bodies being close, two breaths mingling and getting heavier, then slowing down when one of them pulled back. Mischa gently kissed Tom’s forehead at one point, and Tom closed his eyes, suddenly overwhelmed with the feeling of being cherished like this. Then Mischa’s lips were on his again, gently teasing the tender flesh, and Tom shuddered as his body responded to the slight soreness of his bitten and overused lips. He briefly registered Mischa’s grin; then he was being lowered onto the couch, and finally they were lying next to each other, stretched out and able to let their hands rove as much as they wanted.

In the beginning it was light, almost like exploring someone you didn’t know for the first time. Then their bodies seemed to recognize the feeling of each other, and impatience took over. Mischa none too gently opened Tom’s pants, and then his hands were finally on Tom.

Tom gasped into their kiss, and he could sense Mischa’s breathing quickening as well as the grip on Tom’s dick tightening. Whimpering, Tom fumbled with the opening of Mischa’s slacks, determined to have Mischa right there with him. It seemed to take forever, maybe because Mischa’s lips never left his, but then he finally held Mischa’s cock in his hand.

Mischa rewarded him with a groan and a firm stroke all the way from the root of his dick to the tip, the precome making everything slick.

It was so easy after that. Their lips met where they breathed each other in, Tom whimpering every time Mischa rubbed the sensitive head of his dick, Mischa growling when Tom sped up, demanding that Mischa be right next to him in his pleasure.

It was impossible to say how long it lasted, but the wave came inexorably, pulling them with it and crashing over them, making Tom shout in pleasure and joy and Mischa groaning, sounding almost pained, his teeth deep in Tom’s shoulder as they came together.

“Did you actually bite me?” Tom’s voice was surprisingly mellow for someone asking that question. Mischa only grumbled and pulled him closer. He had managed to locate a blanket on the back of the couch, and now they were snug and warm and, most importantly, as close to each other as they could possibly get. He had no intention of moving for the foreseeable future.

Maybe forever, really. He stretched languidly, keeping a firm hold of Tom while doing so.

He felt more than heard the drowsy chuckle against his chest. “You’re not going to let me go any time soon, are you?” Tom didn’t sound terribly upset about that fact.

“I will if you keep up that racket,” Mischa muttered. God, he felt good. He had completely forgotten how it felt being like this, all fucked out with a sweet boy in his arms. He stubbornly ignored the fact that it had been a very long time since he had had any boy but Tom, and that he’d never really bothered to hold those boys, sweet or not. If being a badass Dom took a bit of self-delusion, he was all for it. Reputations had to be upheld, if only in your mind. He smirked.

“Are you making plans to take over the world again?” Tom raised his head and looked down at Mischa, expression half suspicious, half blissfully satisfied. He had a tuft of hair sticking up in front, and the general impression was one of a mussed and very happy man. Thoroughly mauled, in other words.

Okay, not as thoroughly mauled as he would be later, but still, Mischa considered it a job very well done.

“You are, aren’t you? You’re not listening at all.”

“I most certainly am making plans,” Mischa answered haughtily. Or, well, he aimed for haughty. His yawn might have ruined the impression somewhat.

At least it must have to Tom. He got this soft expression on his face, reaching down and gently moving a lock of Mischa’s hair away from his forehead.

“What do you say we postpone the ‘hanging Tom from the ceiling and torturing him’ scene and spend the evening on the couch? We could get some take-out.”

“I don’t hang you from the ceiling,” Mischa said, letting his hand slide lightly over Tom’s side.

“No, because you think that ropes are boring. Hey, should I worry about the fact that neither of us are protesting the torture part?”

“No, because I’m very good at torturing you,” Mischa said. In his opinion, a pretty good comeback. Unfortunately, his stomach chose that moment to make known that he had only had two bites of a decidedly sad airplane sandwich since this morning, and rumbled loudly.

“That settles it. There’s no way I’m having you starve to death before you torture me. After, sure, but I’ve been looking forward to this weekend for ages. Besides, bodies would be really hard to hide in this neighborhood.”

Mischa did try to smack his butt, but Tom was surprisingly quick for somebody being all mellowed out from sex. Or maybe Mischa didn’t try too hard Doing relatively sane and responsible things during the day, I’m always looking forward to coming home to see what my characters have been up to. It’s only very rarely what I want them to do, but there you go. I have no problems whatsoever reading both Flaubert and smut (although not at the same time), and the only thing I like more than chocolate is a good comfort read.

To me, the best thing about writing is the rush; it’s almost a physical high when you’re writing and it’s going well. As for the worst part: Nobody ever told me that fictional characters do exactly as they please! All that talk about ‘the author’s intention’? This author is running around, desperately trying to figure out what my heroes want to do and then coaxing everybody into something vaguely resembling a consistent plot. Sigh.

One thought on “How to Domesticate a Russian Bear by C.B. Conwy Release Blast, Excerpt & Giveaway!”