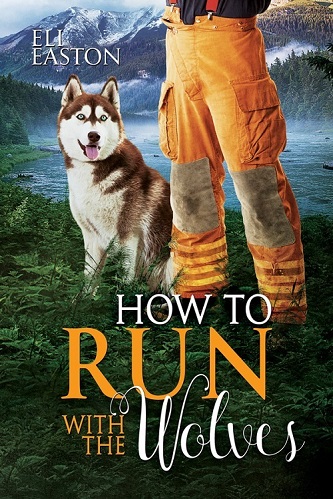 Title: How to Run With Wolves

Series: Howl at the Moon 05

Blurb: Zeus loves his job on the Mad Creek Search & Rescue team, and his inner Saint Bernard is finally being used to his full potential. When he sees a mysterious and wild-looking quickened—a dog shifter—at an earthquake site in Alaska, Zeus is compelled to investigate. Zeus falls hard for the primal beauty of Timo and of Alaska itself. Both call to his deep canine soul. But the Qimmig pack’s laws are as harsh as the Alaskan winters, and Timo is out of his reach.Timo’s pack of dog shifters left their Inuit village generations ago and have lived wild ever since. Not trusting the “one-skinned,” and with their numbers dwindling, the Qimmig are on the verge of extinction. Timo is shocked to discover a whole group of “two-skinned” working as a rescue team, and he is particularly fascinated by Zeus, a gentle giant. He senses what Zeus feels for him… but it’s forbidden.Can Mad Creek save this lost quickened clan? Perhaps—if they can learn how to run with the wolves.

How to Run With Wolves is the fifth book in the series Howl at the Moon by Eli Easton. I adore this unique series and have enjoyed all four previous books a lot. Overall, the series is sweet and really quite charming, which fits since there are characters who have not always been human and some only recently transformed into dog shape shifters. While the previous books didn’t have a lot of angst, this one really does ramp up the angst with one MC and a number of minor characters having very little trust to the outside world.

Since the end of the fourth book, we pick up with Mad Creek Search and Rescue team having been formed and now deployed to help humans during natural disasters, in their human skins not in their dog skins. One of the rescuers is Zeus. He was born quickened and grew up in Mad Creek and had moved away for a while. Unlike other quickened, he is shy around people and has an intense dislike for crowds. But nature and the open spaces call out to him and appeal to the Saint Bernard nature of his dog counterpart. It is on a rescue in Alaska that he discovers another quick. He hadn’t understood at first, until he figures out that the quick that he had seen must be part of a native tribe which keep to themselves. This is an exciting revelation because the town of Mad Creek had always wondered and was sure that they couldn’t be the only quickened in the world.

Timo lives with the rest of his tribe, which they call themselves two-skin as they change into the Huskies that used to be sled dogs for one of the local Alaskan tribes before white settlement. His ancestors had left the human world and they now live isolated. When he found another two-skin who was using his enhanced sense of smell to locate and save humans this was not a complete surprise, the surprise was that they were helping humans. Timo is in fact on an expedition to find more two-skins on their own to join their tribe, with low live birth rates the group is dwindling in numbers rapidly. But really, he needed to get away. His brother, Yuki, is the alpha in a group that has a definite pecking order that made life harsh, especially for Timo’s little sister, Hitty.

With their paths now together, Zeus and Timo want to help their people. Timo’s distrusting nature makes his character feel cold and distant, and at sometimes a tad manipulative. He is slow to trust, even when the people of Mad Creek give their help. However, that is the harsh reality of world in which he lives. Mad Creek is a revelation to Timo, but Timo knows that he needs to save his people. Between all this, Timo needs to understand what is happening between him and Zeus. His is everything that is kind and gentle, but also strong. He has a lot to deal with emotionally, something that he hasn’t had to do in the past. Zeus is certainly opening him to a new world of possibilities in more ways than you can imagine.

Timo and Zeus meet when their lives collide with each others when Zeus is sent on a search and rescue in Alaska after an earthquake. Zeus is sweet and caring. Timo is from a Qimmig pack who used to be dogs many, many generations before. They had a falling out after they quickened and removed themselves from the inuit they were with.

Timo has outdated ideas about a pack due to their isolation from everyone else. Timo goes to mad creek with Zeus and begins to see things in a different light. But it still takes time for him to admit and process how he feels about Zeus. Between feelings, getting to know others and finding solutions to the Qimmig’s survival love blossoms.

Amazing story with love and struggles. I loved everything about the story. The descriptions of Alaska were beautiful and awe inspiring.