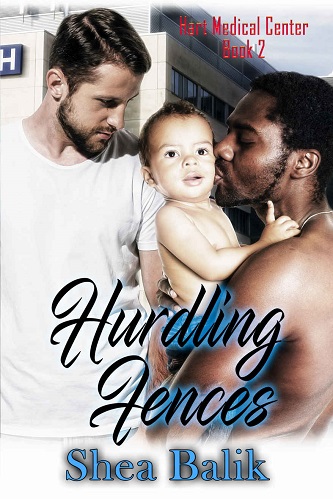 Blurb: As an Omega and a single father, Tenzin Patel knew his chances of finding love were slim to none. It didn’t help that the last Alpha he was married to took off and left him without a word. In their world, that meant a life of being alone. Not that it mattered, Tenzin wasn’t sure he’d ever be able to trust another Alpha not to screw him over.

There wasn’t much Dr. Emmett Gates hadn’t accomplished. As one of the country’s leading pediatric orthopedic surgeons, he was the epitome of success. If only he could find that one Omega in order to have the family he desperately wanted. That was proving harder to do than he imagined, especially when he compared all Omegas to the one he couldn’t have, Tenzin Patel, who not only was married but had kids. No way would he ever try to break apart a family, which left him alone.

When tragedy strikes and the two are thrown together, Emmett was thrilled to find out Tenzin was divorced. The only problem was the obstacles Tenzin had put in place to block him. Good thing Emmett was good at Hurdling Fences to get what he wanted.

Review: Tenzen has a secret that if found out could spell disaster. Dr. Gates has been attracted to Tenzen since first laying eyes on the man. Secrets are revealed when after Tenzen’s daughter is hurt that she is not his and his husband left.

I loved this story. The stalker has turned his/her sights on Tenzen and along with that the threat of his daughter being taken away. I loved how Emmett steps in to help Tenzen and the two grow closer.

It was an awesome read but I admit to wanting to know more about the stalker’s identity as I have my suspicions about who they might be.