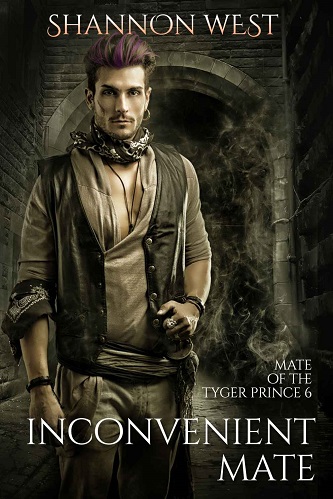 Series: Mate of the Tyger Prince 06

Blurb: After a long stint in the training camps, Prince Derrick and his best friend Kylar are finally coming home to Tygeria. Celebrating on the lawless moon Belline, they run into Drex pirates and a wild brawl ensues. When the smoke clears and the dust settles, a friendly drink with a gorgeous young man named Egan leads to more than they bargained for.

Both Kylar and Derrick wake up the next morning in the brothel upstairs, bleary-eyed, hung-over and knowing that something significant happened to each of them—they just aren’t sure what it was. Running to catch their shuttle, they slip away from their wild night not knowing that the handsome and dangerous Rhaegar Barbosa, the pirate king himself, has claimed Derrick as his mate.

Teaming up to find the men who they now claim as their own, Rhaegar and Egan head to Tygeria. Rhaegar takes matters into his own hands and kidnaps Derrick, along with several members of the royal family. When threats begin to mount from all sides, Rhaegar realizes he may have to give up everything if he hopes to keep the one man he can’t live without.

Review: Each book in Mate of the Tyger Prince collection features a different romantic couple. To enjoy the overall story arc and crossover characters, I would recommend reading the series in sequential order.

Derrick and his best friend decide to spend their time after finishing training, getting drunk. To bad their memories are a bit foggy. Derrick is the prince to his world, and is now facing a young man who is pregnant. A man who is a pirate, a pirate that has some big secrets. The trouble is the King states that Derrick must marry Egan, a man he does not remember. The problem was, Derrick was not the one who got him pregnant. Kylar needs to come home soon.

I am afraid that this series is one of those that I couldn’t remember very well. Which is not a good sign for me. The constant going back and forth is troublesome and drove me nuts. The characters are charming but also spunky as hell. I don’t much care for Rhaegar. I think he has more secrets to tell, but he comes off as an ass. The king however needs to be kicked in the butt. He was an ass to his son and didn’t do the book any good. There is adventure, danger, murder, hot sex and well you will just have to read the story for more.

I hate to admit that this series was not one of my favorites. The story is entertaining and I did enjoy it, but the story just doesn’t flow right. It came off as choppy and not well articulated, but that doesn’t say the story is not good. It has some great potential, but so far it just needs a bit more work to it. I will see how the next book turns out to make up my mind though.