Hi peeps! We have Louisa Masters popping in today with the tour for her new release I’ve Got This, we have a fantastic exclusive excerpt and a brilliant $20 giveaway so check out the post and enter the giveaway! ❤️ ~Pixie~ P.S. Keep an eye out for my review coming soon! 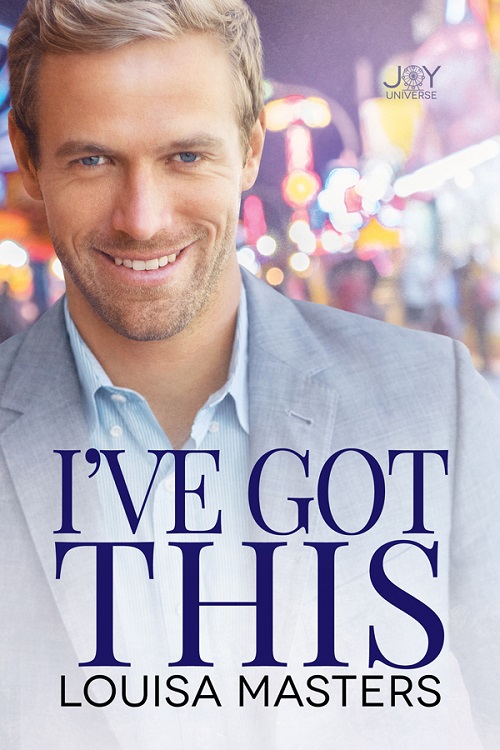 Derek Bryer loves his life. His job as an assistant director at Joy Universe, the second-largest theme park complex on the planet, makes him indirectly responsible for bringing joy (pun intended) to millions of people. So what if none of his relationships are that close? Everyone he meets loves him.

Except Trav Jones. For some reason, the visiting Broadway performer would rather Derek just go away. He appreciates Derek’s work ethic, though, and after Trav steps up when Derek desperately needs someone to fill in for his sick staff, Derek seizes the chance to convince Trav he’s not such a bad guy.

Falling in love while distracted by a murder at the park, food poisoning, and colleagues laying bets on their relationship won’t be easy, but between the two of them and with the magic of Joy Universe, they’ve got this. He seems to realize we’re just standing there holding hands, and he flushes and lets go. Man, that blush! “Uh, this is really great of you, Derek. I-I want to say again how sorry I am for being weird yesterday.”

And if that’s not the perfect opening for phase two of my plan, I don’t know what is.

“It’s fine.” I have to handle this perfectly. I’m not likely to get another shot. “We got off on the wrong foot. Actually, I wanted to ask… did I do anything? It just seemed like you”—how to put this?—“took an instant dislike to me, and I wondered if it was—”

“No.” He interrupts me, which is good because I’m not sure exactly how I was going to end that sentence. “No, you didn’t do anything. Um, I was actually predisposed to like you. Everyone here has good things to say, and I thought it was really great that you were willing to go above and beyond to keep the shows running.”

I don’t say anything, because what the hell can I say? If he was predisposed to like me, what was our little… confrontation about? Wait, does he mean like like? Is this some sort of playground-crush thing, where a kid is mean to the one he likes to get their attention?

I must be wearing my confusion all over my face because he hurries on. “It’s just…. God, this is going to sound so stupid, and shallow. I’m not shallow, I swear. But you look like the boy-next-door jock frat hero, and that pushes a lot of not-great buttons for me. So when I saw you, it kind of brought up some bad feelings.”

What the ever-loving fuck? He judged me based on my appearance?

Don’t get me wrong. That’s happened to me before. A lot. But usually I’m not found lacking.

I’m trapped between being offended and confused, and the fact that his face is getting redder and redder as he tries to explain is adding a healthy dose of lust to the situation.

“Okay,” I interrupt. “Let me get this straight.” He subsides into silence, looking utterly miserable, and I want nothing more than to make him smile. I’ve got it bad. “For reasons I can only guess at, you don’t like the way I look, and you reacted badly to that despite the fact that I’m not—” Fuck, how to finish this sentence. “—that bad a guy?” Lame.

He cracks a smile, the blush subsiding a little. “If someone were to give me a piece of paper with everything I’ve learned about you since I got here written on it, but I never actually met you, I’d say you’re a really great guy.”

I take a minute to think about that. On one hand, it seems like a nice compliment, but…. “So you don’t like the way I look?” Should I be offended? Or just write it off to personal taste? Or both?

“You know you’re hot,” he says bluntly, and his cheeks are red again. “But… it’s not your looks, exactly. More your manner.”

Now I’m truly offended. I work damn hard to be friendly and approachable, even when I don’t want to be. I’m about to end this conversation, and our acquaintanceship, but Trav’s still talking.

“You were popular at school, right? Played football or something?”

“No,” I say shortly. He raises an eyebrow. “Lacrosse,” I admit. I don’t comment on the “popular” comment, because it seems like bragging. Plus, given the subject we’re discussing, I don’t think it would weigh in my favor.

“Did you play in college too?”

I nod reluctantly. “A lot of people play sports,” I defend, and he gives me a patient look.

“And I’ll bet you were in a fraternity.”

Am I supposed to feel bad about this? I played sports and I was in a fraternity, and people liked me. So were a lot of other people.

“I was bullied. A lot. By the popular jocks at my high school and college. Most of them were in fraternities too.”

I close my mouth. I never bullied anyone, but I’m ashamed to say I knew some of my friends did. Not when I was around, because I made it pretty clear how I felt about it—my parents had strong opinions that they passed on to me—but I probably could have done more to make sure it wasn’t happening.

“I’m not saying you’re a bully,” he tells me earnestly. I can see embarrassment and something else—shame, maybe?—on his face. He can’t meet my gaze. “But you have a lot in common with the people who did. I sometimes find it hard to deal with people who have a certain charm and charisma. That’s my problem, not yours, and I’m really sorry I took it out on you yesterday. But I hope this helps you understand why I did.”

I just stand there like a lump. The truth is, my looks and charisma have opened a lot of doors for me over the years. I’ve worked damn hard to keep those doors open and to develop the opportunities they gave me, but I’m not stupid—I know people with less charm and who aren’t as good-looking sometimes don’t get the same welcome I do. The world can be a shallow place, for all we protest that it isn’t.

The silence draws out as we stand awkwardly in the hallway.

Trav swallows. “So… uh, I’m glad I got to explain. I, uh, I’ll see you around.” He turns away and continues toward the stage door.

What am I doing? I haven’t been able to stop thinking about this guy for the last thirty-six hours. Am I really going to let him walk away just because my feelings are bruised—over something he’s apologized for and I don’t really even have a right to be upset about?

“Trav!” I jog after him. Luckily he hasn’t gotten far, and he stops to wait for me. “Have you eaten?”

He looks surprised. “Uh… no. I usually have a light snack before the show and then supper after.”

“Great. Come and have supper with me.” I can still feel the exhaustion of the day dragging at my body, but my mind is energized, and I’m willing to sacrifice sleep for a little longer.

“Are you sure?” He seems wary, and I get it. He probably wasn’t expecting me to react to his confession with a request for a date.

“Yes.” I make my voice firm, and then flash my megawatt smile. He takes a step back, and I tone it down. “Sorry. Force of habit. Yes, I’m sure. I really want to go out for a meal with you.”

He’s still a little suspicious. “You’re not offended by what I said?”

“I’d be lying if I said my ego isn’t a little dented,” I admit. “But you’re entitled to your feelings. Things happened to you to make you feel that way, and I can’t expect all that to disappear like that.” I snap my fingers for emphasis. “I can only hope to show you that I’m not like the people who bullied you.”

He studies me for a second more, then nods slowly. “You’re right. Derek, I’d love to have supper with you.” Win a $20 gift certificate for Amazon, iBooks, B&N, or Kobo!