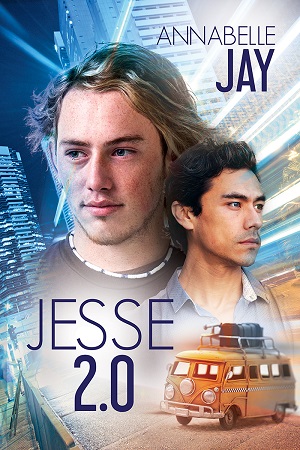 Blurb: What if you aren’t the only you?

Shy and studious Maddy Stone faces just that question. Months ago he lost his boyfriend, Jesse, to suicide, and now he’s volunteering at a psychiatric hospital. When he intervenes to save a man there, he’s shocked to find a face he recognizes. It’s Jesse, who explains that he’s been cloned… by Maddy’s father. And when the reproduction technology duplicated him, he was ordered to avoid Maddy at all costs. Breaking that rule puts them both in danger.

Maddy, his girlfriend, Georgia, and Jesse—who Maddy calls Jesse 2.0—are on the run. But as the secrets continue to come to light, Maddy is faced with a decision—continue with his life or be the Maddy he was before technology intervened.

Review: I love science fiction. This story however was confusing at times. There was evil scientists and the explanation of the duplicate process which is where I was lost. Maddy lost his boyfriend Jesse to suicide only to see him again and get blown away. The concept of duplicating someone without their previous consent irked me as I thought that was wrong.

I quite liked the action scenes, them being on the run and trying to stay ahead of those after them while at the same time reconnecting when the scene called for it. Still it was a lot of information to take in at once and I felt myself bogged down with the overload.

I still enjoyed the story as it played it out. Maddy and Jesse were great together and their friends were a constant encouragement and support for the two.