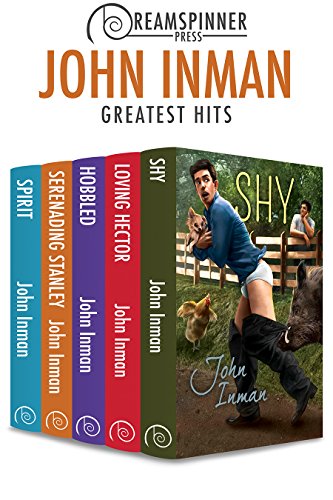 —Shy: Funny what a couple of guys can accomplish when they’re crazy about each other. Not even nine hundred chickens can stand in the way of true love.

—Loving Hector: Hector’s evil ex is dead set on holding on—even if it means kidnapping Hector to keep him from Dill forever! Now Dill has to pull an army together to rescue Hector, and just where the hell is he supposed to find an army? Gads, if only Dill could write books this interesting!

—Hobbled: Danny had plans to come out this summer—maybe even get laid! He doesn’t have time for ankle monitors and serial killers! Then ginger-haired Luke Jamison moves in next door. Gee. If Danny can survive it, this summer might not be so bad after all.

—Serenading Stanley: Welcome to the Belladonna Arms, a rundown little apartment building perched atop a hill in downtown San Diego, home to the city’s lost and lovelorn. While Roger tries to batter down Stanley’s defenses, Stanley turns to his new neighbors to learn about love.

—Spirit: Toss a murder, a hot young stud, an unexpected love affair, and a spooky-ass ghost with a weird sense of humor into Jason’s summer plans, and you’ve got the makings for one hell of a ride.

Review: This is the best hits collection bundle for John Inman and I have to say, this is truly a collection of brilliant book from an assortment of genres. I’ve read maybe one or two other John Inman books but to be quite honest, these ones have completely blown me away. I’ve rated this overall 5 out 5 – however, I am just going to make note that I also rate all of the featured novellas 5 as well.

All these stories are in the first person but brilliantly written – not once did I wonder what the other MC was thinking while reading all of these stories. The bonus is that they are all set in San Diego and I absolutely adore that city!

There are 5 stories featured, which are as follows:

The story is told by Tom – he is a mild mannered banker with a debilitating case of shyness. At an ex’s part he meets Frank – who also shares the same social anxiety. What ensues is a comedy of errors as the two guys overcome their anxiety and get to know each other.

This is funny and irreverent. The guys share a wonderful attraction which is over and above their shared disorder. Throw in a hilarious Chihuahua with a mind of its own and you got the start of a great relationship. Both Tom and Frank some bad apples in their lives but they can overcome any obstacle. I had kind of guessed the ending – at least part of it – but it is a tad gruesome and had me thinking of the TV show Deadwood. (Any fan of Deadwood will know what I mean when I say pigs!).

The person telling this story is Dillard Brown – he has a nutty family including a mother who insists he’s straight and a grandfather whose sexuality seems to be fluid. He finds a stray dog – which he saves – and affectionately names it Chester while he half heartedly tries to track down the owner. Then enter, Hector, owner of said dog and actually made a brief (albeit nameless) appearance before the dog came onto the scene!

This book is nothing short of hilarious. Chester is on one escapade to another and quickly attaches himself to Dill after being returned to Hector. Dill and Hector’s relationship is nothing but bumpy but the attraction between the guys and their personalities – they are made for each other (quite literally). Then there are the minor characters, Dill’s boss’s and his grandfather take the prize for hilarity while his parents are simply nutty. His mother is completely adorable even if she is in her own little world.  Then there is Hector’s ex (Valdemaro, though I kept thinking Voldemorte), the only thing not funny about this book: it was a good storyline though and brought the characters together wonderfully.

This is basically Rear Window re-told (which had been re-told as the movie Disturbia, too) with two young nineteen year old gay guys who happen to be developing a romantic relationship on the side. The narrator is Danny – he had something of a tantrum at work and now has not only a cast one leg from the incident but he also has a police ankle device from the judge after his ex-boss pressed charges.

So we have a bored teenager alone because his father has to go away for work and there are reports of a serial killer on the rampage after young guys. I don’t want to give away the back story because I think the whole “Rear Window” thing is a big give away. When a new neighbour moves in and Danny meets with some precocious young boys the drama and the mystery escalates rapidly. I will admit that it took me some time to figure things out but I will admit the side story with Danny’s father I had figured out as soon as the first clue was handed out.

Luke and Danny are really sweet together and their story is a great ride!

This is book 1 of John Inman’s series Belladonna Arms and after reading Serenading Stanley I definitely want to (need to) read the rest of the series. Shy archaeology student, Stanley, moves into the fairly cheap Belladonna Arms so that he could be closer to uni (against the wishes of his mother who lives in the city). There he meets the hot and newly graduated nurse, Roger. Stanley is very reticent when it comes to Roger’s advances and so Roger has no choice but to woo the man.

This is another funny story (though still did not laugh as much as I did in Shy and Loving Hector). Besides Stanley and Roger, there are a whole host of quirky characters including transgender, transvestite queens, and just a few oddball gay men that all call the Belladonna Arms home. This is a lot of fun and very sexy.

Time for a bit of a spooky story! Again, this is another book where I had elements of the story figured out where it comes to the ghost. I don’t want to go into too much details because it is a really interesting story that you will enjoy – even if, like me, you have figured out some of the major parts of the big picture, the smaller details are really great.

The story is told from the POV of Jason, who has been left as the carer of his nephew, Timmy, for a month while his sister and her less than stellar boyfriend go off on a holiday. Immediately Timmy starts talking about the man in the walls of his uncle’s house. Then Jason runs into the brother of his sister’s ex-husband, Sam. Sam and his family have not seen Timmy since his brother disappeared. That is where the true mystery starts. It also helps that there was a definite spark of attraction the moment that the two guys met.

There is some drama, romance, mystery, some of the hysterical one liners that I now come to expect with John’s writing and add into that a dash of horror. This is one spectacularly spooky story! It is so damn creepy that I love it!