Hi guys! We have Jena Wade popping in with her new re-release Just A Week & new release Just A Year, we have a great excerpt so check out the post and enjoy! ❤ ~Pixie~ 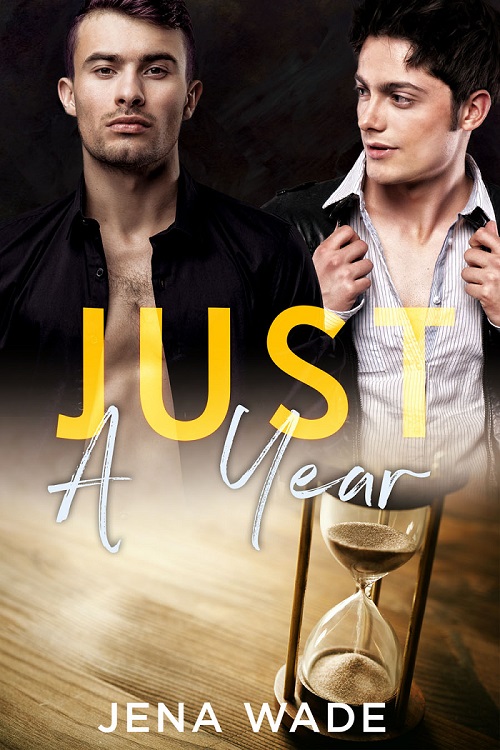 Just a year is too much time to spend apart from the man you love, but Seth has a carefully crafted plan for how to make it work. Taking an internship four hours away from Maddox may not have been the smartest choice Seth has ever made, but he is determined to make it work. Until life throws a wrench in his plans and turns his and Maddox’s world upside down.

Just a week is not enough time to fall in love, but Fate doesn’t care. Seth’s carefully crafted plan for how his life will go doesn’t include falling in love with a guy in his horrible hometown. He wants to start a new life anywhere but at home. Until Maddox storms in with his multi-colored hair and carefree attitude.

Long distance relationships don’t work and Seth isn’t into gambling with his future. But the more time he spends with Maddox, the more he’s willing to throw caution to the wind. Now his plan for the rest of his life has been turned upside down and seems to include things Seth never thought possible, including a lifetime of happiness in his hometown. from Just A Year

Great, now I would have the Rentsoundtrack playing in my head throughout the entire ceremony.

I took a deep breath and focused on the commencement speaker. After five long years, the last one and a half being the longest by far, I’d finished my degree. No more term papers, no more eight a.m. classes, no more all-nighters in the library so I could have a homework free weekend with my boyfriend.

He sat out there in the crowd with my parents. I felt his eyes on me, but I couldn’t see him. I’m not even sure which section they were in. The Breslin Center was filled to the brim with graduates and their families. All waiting for their individual name to be called so they could walk across the stage and collect a fake diploma. The real one wouldn’t arrive in the mail for a few weeks.

Just a year. That wasn’t that long, was it?

Maddox and I had survived the past year and a half getting to know each other over Skype and Facetime, chatting, Snapchatting, the works. Thank God for the digital age. On the rare occasions that we physically saw each other, well, I mean, I don’t really have to explain how those encounters went.

Jobs right out of college were hard to come by, everyone knew that. Maddox would understand.

I took a deep breath, walked across the stage, accepted my fake diploma from the university president, smiled for a picture and then I was done.

Five years, would have been six if I hadn’t busted my ass taking summer courses, done.

I smiled as I looked around the crowd, searching for Maddox.  He’d make this whole thing worthwhile. It was his idea for me to walk at graduation. I was all set to skip it, but he insisted that I needed to do the traditional thing, and he and my parents would drive up for a nice visit.

Against the odds, I found him. His pink spiked hair stood out. How could it not? He grinned and waved frantically.

Worth it. Totally worth it. I would do anything to see that smile. To earn that smile.

Let’s hope it stayed in place after I told him about the job offer. Jena began writing in January of 2013 as a New Year’s Resolution–and so far she has stuck to it!

She lives in Michigan. By day she works as a web developer, and at night she writes. Born and raised on a farm, she spends most of her free time outdoors, playing in the garden, or riding her horses. She also helps run the family dairy farm.