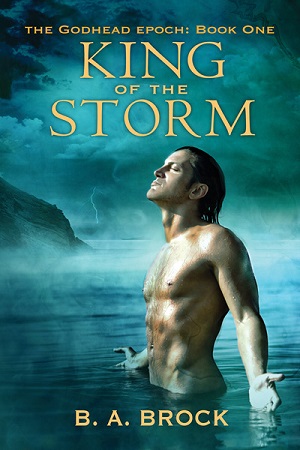 Title: King of the Storm

Blurb: No one can outrun destiny or the gods.

In Epiro, a kingdom in Greece, Perseus is prophesied to be a great demigod hero and king, with a legacy that will shape the world of Gaia. When he was born, his grandfather exiled him, and his mother brought them to Seriphos, where she created an academy for demigod youth. Perseus trains there and waits for the day when he will be able to take the throne of Argos.

Despite potential future glory, Perseus’s fellow students think he is weak. By the time he reaches manhood, he has given up the hope of having any real friends, until Antolios, a son of Apollo, takes an unexpected interest in him.  Perseus and Antolios fall in love, but Antolios knows it cannot last and leaves Seriphos.

Perseus, grief-stricken and lonely, rebels against the Fates, thinking he can avoid the prophecy and live his own life.  But when the gods find him, he is thrust into an epic adventure. With his divine powers, he fights gorgons and sea serpents, and battles against his darker nature. Perseus strives to be his own man… but the gods have other plans.

Review: This is the first book in The Godhead Epoch series.  This book was an interesting journey about one man’s, Perseus, journey through life from childhood to adult and the challenges he faces throughout as he strives to live his life the way he wants to and not the way the gods want him to.

But gods have a way of getting what they want. I felt some scenes were a little rushed and without a lot of details that would have made it so much better. The thing that upset me the most is all the mf in it after the halfway mark as I’m a mm only reader. So I skipped those scenes altogether.

Some of the story seemed to be slow while others were fast paced. The battle scenes should have been slower with more depth to them. Since this is the first book in a series I assume another will follow soon. While I’m looking forward to reading it I do hope there will be more details and a whole lot less mf in the next one.