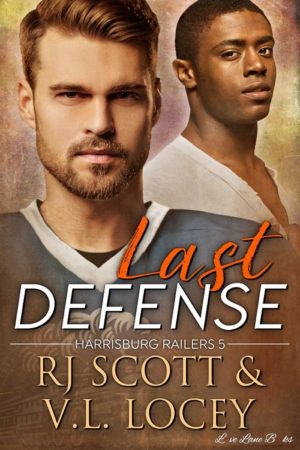 Blurb: Two men afraid to feel, have to make choices that could end up breaking down their defenses and leading them back to love.

Every time Max Van Hellren steps on the ice he knows it could be his last time. At thirty he’s past his hockey prime but he’s also hiding a life-threatening injury that private doctors warn could kill him. This is his last season, and there’s a chance he could lift the Stanley Cup after fourteen years in the NHL. He just needs to stay safe and healthy; difficult when he’s known for his heavy hitting and with a propensity for dropping the gloves and putting his body in the way of pucks to keep his team safe.

A one night stand with a sexy man was just what he needed, dangerous and hot, but what if it turned into more? Would he actually have to share the secrets he so desperately tries to hide?

Ben Worthington had it all. A fulfilling job running the CrossRoads Shelter, his loving aunts, and a husband that understood his devotion to animals. Then, the love of his life left him, succumbing so quickly to an unexpected sickness that Ben never had time to say goodbye. The violent loss scarred him.

Unable to move past his fears, he moves from lonely encounter to lonely encounter, slaking a desperate need that is eating away at him, but never making a connection that could lead him back into love. One night with Max makes him want more, but will giving into the temptation open the door to feelings he can’t contain?

Can these two broken men ever find a way to be together?

Review: This story is an excellent addition to the Harrisburg Railers series, and while Max says goodbye to the team the story fulfils its happy ever after with bright hope for the future as he finds love with animal lover Ben.

Max has a secret he has hidden from everyone, but he’s hoping that his last season will fulfil his dreams of a Stanley Cup win. Meeting a man he could love never crossed his mind but bumping into Ben from the local no kill shelter has him evaluating just what he wants after his hockey career ends.

Ben has sunk himself into his shelter for the past couple of years after losing his husband so suddenly, when he meets a sexy hockey player who ticks all his boxes he doesn’t know if he should take another chance on love. When his nephew turns up it’s up to Ben to keep him safe from the boys’ father, his brother-in-law who despises Ben, and Ben finds himself in the man’s crosshairs.

I have to say that this story is attention grabbing, with the various issues that crop up there is never a dull page. We get drawn in pretty quickly and as we get to know the characters we root for them to overcome their fears and accept the love they are offered.

Ben is a sweet man who has a heart of gold, the loss he still feels for his husband is poignant and his fears over losing someone else is understandable, especially when Max reveals his secret. Max first comes off as someone looking for a good time, but it soon becomes clear that he is searching for something that he didn’t know he was looking for. Together they make an amazing couple, their feelings for each other plain to see and their hotness just blazes the pages.

This story is well written and the characters are brilliant, whether it’s Ben and Max or the Railers team as a whole each character is well developed and as each graces the page their individual personalities shine through. The storyline is crafted in such a way that you never know when the trouble will strike and that ending! OMG it was brilliant executed, smacking you in the face with shock.

I recommend this to those who love fantastic characters, great storylines of exciting hockey, finding new love and a dash of danger.