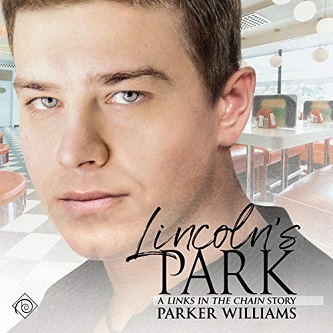 Series: Links in the Chain 01

Since then, he’s tried to atone for his past, including walking away from his family’s wealth. He opened a diner, hiring people to work for him that he would have spit on before his epiphany. He’s found peace, which he’s about to lose to a hazel-eyed man.

Noel Simmons wound up on the street when his parents discovered he was gay. His path leads him to Lincoln’s diner, where he asks for a job. He’s thrilled when Lincoln agrees to hire him but finds his new boss perplexing. Can anyone be this kind and decent?

What starts out as business becomes something more. Noel discovers he needs Lincoln in or-der to feel safe. Lincoln needs Noel to complete him. But when Lincoln’s past gets in the way of his present, will the two have a future?

Review: Lincoln’s Park is the first book in Parker Williams Links in the Chain series.

The story starts with Lincoln Merriweather. He had been a ruthless businessman who had played as hard as he worked. He was raised a spoilt, rich brat until the day he met someone who changed everything about the way he saw the world. There was love but there was never going to be a future together. And so when he found himself on his own, he opened the Park View Diner and decided that he would help as many people as he could.

The Park View Diner has been his life for the past ten years now. Noel walks in off the street, quite clearly homeless and desperate for a job that no one would give him due to his appearance. Noel is young, only in his early twenties, but he’s been on the streets since his parents discovered that he was gay. Lincoln is a dream come true and gives Noel so much opportunity to help him to get out of the hole he had found himself in.

Lincoln and Noel both fight the feelings which are developing as they try to figure out what is happening between them. The one thing that is clear is that they belong together, and they need each other to feel complete. Added to that Lincoln’s past in the form of his rich family come to threaten all that he has built. Noel is there to lend Lincoln strength, but the stress and the situation could threaten what is shaping up to be a beautiful romance.

The narration of this story was performed by Tristan James, who was an unknown narrator to me until I finished this book. James does justice to the story and characters. He captures the vortex of emotions mixed with the strength of Lincoln, while he conveys the strength, vulnerability and determination of Noel.

This is a sweet story full of heart. It’s an intense emotional roller coaster, too, which just makes me so happy that I can’t find words for how much I loved this plot and the characters. I recommend this to people that want a sweet romance with a lot of hope. I can’t wait for the next book, which features Lincoln’s brother and look forward to a story of redemption.