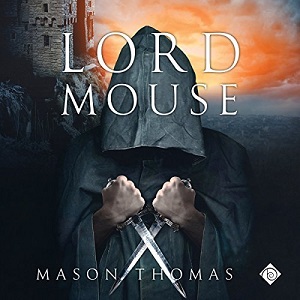 Series: A Lords of Davenia 01

Blurb: Scoundrel by nature and master thief by trade, Mouse is the best there is. Sure, his methods may not make him many friends, but he works best alone anyway. And he has never failed a job.
But that could change.

When a stranger with a hefty bag of gold seduces him to take on a task, Mouse knows he’ll regret it. The job? Free Lord Garron, the son of a powerful duke arrested on trumped up charges in a rival duchy. Mouse doesn’t do rescue missions. He’s no altruistic hero, and something about the job reeks. But he cannot turn his back on that much coin – enough to buy a king’s pardon for the murder charge hanging over his head.

Getting Garron out of his tower prison is the easy part. Now, they must escape an army of guardsmen, a walled keep and a city on lockdown, and a ruthless mage using her power to track them. Making matters worse, Mouse is distracted by Garron’s charm and unyielding integrity. Falling for a client can lead to mistakes. Falling for a nobleman can lead to disaster. But Mouse is unprepared for the dangers behind the plot to make Lord Garron disappear.

Review: If you like swashbuckling action, a good bit of grit, violence and witty main characters you’ll love Lord Mouse. I feel like this story is something of a hot action Robinhood with fast paced adventure, rebellion against evil nobles, and prison breaks. Mouse is a sharp and crafty leader even with his small stature. Don’t think dominant men can’t come in small packages either, his fierce fighting skills are equaled by his fierce sexual chemistry.

Lord Garron turns out to be a good foil for Mouse’s otherwise kill first ask questions later behavior. He’s honorable to a fault, and needs to see that sometimes breaking rules is necessary too.

Joel Leslie’s narration makes this story perfect for the audio format. The varied accents he brings to different characters keeps me intrigued and helps define characters especially when the action gets going. I read this book long before I listened to it and I recommend you definitely plug in your ears and download the audio version!