Hi guys we have O.F. Cieri popping in today with her new release Lord of Thundertown, we have a great excerpt and a brilliant $10 NineStar GC giveaway so check out the post and enter the giveaway! ❤️ ~Pixie~ 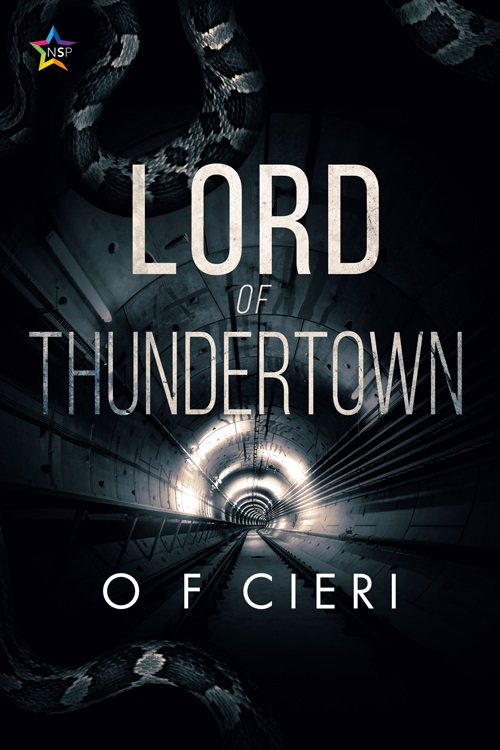 In the movies, Thundertown was depicted like a real town, with boundaries, Folk-run businesses, and a government. In real life, Thundertown was a block here or there, three businesses on the same side of the street, an unconnected sewer main, or a single abandoned building.

When an epidemic of missing person cases is on the rise, the police refuse to act. Instead, Alex Delatorre goes to Thundertown for answers and finds clues leading to a new Lord trying to unite the population.

No one has seen the Lord, and the closer Alex gets to him, the farther Alex gets from his path home.

Sam was tired. All day long, she moved furniture in a small, dirty room in a warehouse in Brooklyn. She got on the train to go home. The conductor announced service delays, and Sam got as comfortable as she could in the glossy plastic seat.

There was no flash of lightning to signal a change. The insidious thing about the Aether was that humans were ill-equipped at handling it. Children had a better chance of being aware of it during a power surge, although they usually experienced it in migraines and blurred visions. The Folk handled the Aether best, and usually very judiciously, because the Aether was a force of nature that couldn’t be reasoned with to respect private property or the sanctity of life. It activated when called and filled the parameters set out for it, and any gap in logic released a flood of unintended consequences. The only sign of something going wrong came from the lights in the subway shutting off abruptly.

Even then, Sam didn’t panic. There were electrical surges all the time, and the lights usually came on in seconds. Instead, she remembered taking the subway with her elementary school class and shrieking with the other girls whenever the lights flickered, thrilled by the shock.

The train hit a hard bump, but rather than rocking back onto the track, the train lurched and tipped erratically. She couldn’t see the other passengers, but she could hear the impact as they thudded against the far wall. Sam managed to hold her grip as a long-empty soda can flew past her head and empty sunflower seed shells rained past. Her heart gripped in her chest as she came face to face with the fact that she’d cast her shot and landed the one-in-a-billion chance to climb aboard a train as it tipped into the river. She was only surprised by how dark the sky was.

The Aether, according to scientific inquiry, does not exist. It can not be touched, seen, smelled, tasted or heard, nor can it be weighed or measured in any other way with tools. The Aether is completely undetectable by any means except the brain; and not clearly.

The train twisted, and so did Sam’s grip. Her wrist popped as gravity wrenched it in an unnatural direction, and she fell, landing feet first on the seat she’d flown out of. Pain shot up her ankles, but the sharp jolt barely distracted her from the rattling of the carriage shaking across a hard surface. The high-pitched scream of sharp edges scraping across metal echoed throughout the train, and then suddenly ceased.

Sam turned on the flashlight of her phone. The windows were broken, and the foot of the train punctured through the floor near the door to the back. Someone was on the floor, trying to pull themselves up by climbing the train seat but not finding the friction, somehow. Another body sat upright, one shoe off. Slowly it raised its head and looked down at a hand that dangled lifelessly off their wrist. There was a guttural sob of pain.

When ancient kingdoms annexed new territory, they would often discover hostile members of the Folk. The ruler of the invading army would have to choose whether to destroy them, or bribe them. Soldiers throughout history have been immortalized for slaying Great Beasts in the service of their King, and similarly, simple farmers and fishermen were elevated to nobility by accepting the ruler’s authority, and recognized as the Lord of the Forest, or Lady of the Lake.

“Are you ok?” Sam asked. The words slurred in her mouth. She couldn’t be sure she was understood. She tried to stand, but her weight pitched in a direction she didn’t expect and she stumbled. She pocketed her phone and dug out a small keychain light instead. More durable, she thought. Better use of battery power. “Are you ok?”

The Lords were meant to be the arm of the state regarding the Folk, any Aetheric or ‘magical’ phenomenon. However, reports of erratic or unpredictable behavior lead Government officials to tap more amiable outsiders for traditional Lordship roles.

It still sounded like she was drunk. There was a click behind her, and the rattle of the door between the train cars sliding open. The carriage was bathed in a dim orange glow. When Sam looked behind her, she saw the train conductor holding a construction lantern. She was an older black woman, gold braids disheveled.

None of this affects the quality of life for everyday Folk. Many preferred to live in the country where private property and building laws allowed them to maintain their own standards. While cities serve as hubs of commerce, the practical effect leaves many at the mercy of a standard of living, including enforced daytime activity, above-ground dwellings, little access to fresh or saltwater, and little tolerance for symbiotic parasite bonding. As a result, many of the Folk engage in creative means to maintain their health and well-being.

A voice cut her off, shrill and panicked. “What’s going on? What’s happening? Why aren’t we moving?”

The conductor raised her hand and tried to quiet the shouting passenger. “Calm down, please. I don’t know, but before we find out, I want to get everybody off the train. Is anybody hurt too bad to walk?”

“No,” said the person with the broken wrist. They sounded like they were in tears, muttering through chattering teeth; “No, no, no, no, no–”

“Good,” the conductor spoke slowly and calmly. “Everyone, please follow behind me in an orderly line.”

Thundertown is a well-known example, arising from an illegal settlement dug into an outcropping of Manhattan Gneiss in New York City. According to records, the Thundertown population was predominantly immigrant, with few English speakers in its first few decades.

The conductor walked down the aisle of the train, balancing against the wall for support. She led a trail of dirty and terrified people behind her, inching along as if huddling for warmth from the glow of the lantern. As she passed, Sam saw her holding a twelve-year-old girl to her waist, clutching her hand tightly. The small girl looked calm and supported the older woman’s elbow as if carrying her gently above the crowd.

The City of New York has repeatedly dissolved the Thundertown settlement.

A pair of doors hung open a few carriages in. The conductor dipped her light outside and pressed her toe down, testing to see if it was safe to leave. She clutched the side of the train door as she lowered down, her foot swinging out blindly for something to anchor itself to. Slowly, she touched down on something, and slowly she shifted her weight off the train and onto the ground beneath. The ground was flat, uniform, and unremarkable.

Unfortunately, the area is too well-known to remain closed for long.

There were no train tracks. O F Cieri lives in New York, where she spends most of her time thinking about anything but what she’s doing at the moment. Her favorite parts of history are the fight scenes. Lord of Thundertown is her first published work.