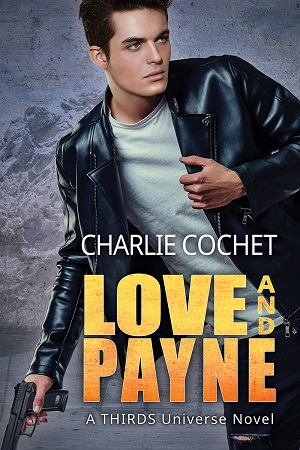 Blurb: Austen Payne, THIRDS Squadron Specialist Agent (SSA) for Destructive Delta and TIN operative, has seen the worst the world has to offer, faced lethal killers, and helped bring down dangerous organizations. But nothing terrifies him more than falling in love. After years of undercover work, Austen is a master at defending himself and protecting his heart… until he meets Osmond Zachary.

THIRDS Defense Agent Osmond Zachary has a huge, doting family, yet something is missing in his life. After meeting grumpy, foul-mouthed, jittery cheetah Therian Austen Payne, Zach knows exactly what that something—or someone—is. Unfortunately Austen seems determined to avoid Zach at all costs.

When Zach foils an assassination attempt, he ends up in the killer’s crosshairs, and Austen is Zach’s best chance at staying alive. Zach hopes the crisis will bring them closer, but Austen has every intention of walking away as soon as the danger is over.

Happily ever after isn’t for guys like Austen, but Zach is determined to show him it can be….

Review: Each book in the THIRDS Universe collection features a new romantic couple. To enjoy the overall story arc and crossover characters, I would recommend reading the series in sequential order.

Austen had been fascinated with the THIRDS ever since he met Sloan. He had been introduced and then recruited. He was the squadron specialist for Destructive Delta and worked for TIN. He was basically a spooked. He had a small problem although I would say Zach was small. Austen had the hots for bear shifter Osmond Zachary.

Osmond had the hots for a certain feisty cheetah who kept him a arms length. He had screwed up an assassin attempt and now they wanted him dead. Guess who is coming to his aid. It looks like he might just get what he wants.

I came across this author when her first book in the THIRDS series and I knew that I had found an series that I would fall in love with. This story is very entertaining with lots of action, danger and fun times with sexy characters. My attention had been caught from the start and kept all the way to the end. It gave me everything I could ask for in a story and so much more. I got a big kick out of Austen and his denial of wanting Zach, and his fall. He is one of my favorite characters after Dex, Kael and Hobbs of course.

I had a blast reading this book and can’t wait to get my hands on the next book. I would definitely recommend it.