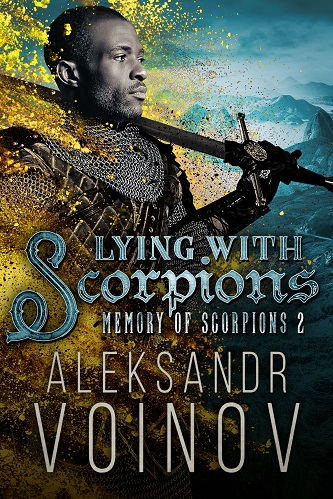 Blurb: If you lie with scorpions, you’d better have a taste for poison.

Now that Kendras’s lover Adrastes has claimed the throne of Dalman, Kendras is tangled deeper than ever in politics and intrigue. As the new leader of the Scorpions and Adrastes’s one true friend, he and his men stand between Adrastes and those who wish him dead.

And many do. Adrastes openly challenges the ocean priesthood for power while establishing himself at court and brokering with the realm’s various factions. He means for the Scorpions to become a fearsome legion again, but Kendras must first learn how to be a good officer and recruit to replace the fallen. His choices will determine the future of a group steeped in hundreds of years of history and tradition.

As both Kendras and Adrastes settle old scores, a new enemy arises in Commander Graukar, a war hero loyal to the old order. In his formidable mountain fortress, Graukar may hold the balance of power. But while Adrastes aims to either rule or destroy Graukar, Kendras finds himself doubting Adrastes for the first time, and sharing more with Graukar than he ever thought possible.

Review: Well, it’s finally done and after a long time filled with anticipation, book two of the Memory of Scorpions takes us into yet another enthralling tale.

In direct opposition with Book one, this novel starts relatively calm. Adrastes is now the new Lord Protector and on his way to claim Dalman and her throne with his very own personal guard, the Scorpions, and his lover Kendras at his side as his personal bodyguard. And they are needed too, because Adrastes claims the throne with barely concealed threats.

And it is apparent that this book is quite different from the previous in many ways. It starts calmly and the plot flows steady, slowly taking you through the story. Nearly half of the book is a slow pacing through Adrastes’s setting on the throne, the games and politics of the generals, a slow change on Adrastes’ personality or perhaps character leaving Kendras in a state of uncertainty for most of the read. Now I always thought that Kendras has a lot of inner thinking going on with him, but his new role as Officer has him overdoing it. I’m not sure how much I liked that fact or the drag of half of this story.

However the pace did pick up, the story became quite interesting and surprising. I think I felt the same with Kendras there when it came to Graukar and the Ambassador of the Jaishani. I was astonished with those characters. I expected a brute on Graukar and his genteel soul left me with a jaw hanging. As for the Ambassador, oh my, what a character, and what amazing possibilities that one brings for the future of this series.

So there it is, this book starts shattering slowly into pieces once the action picks up. I loved the “mission,” I loved the amazing help of the Black Legion, I loved the feeling and emotions that came from the unexpected new love affair, and I felt the painful grip in my heart when Kendras finally got a glimpse in his past and his family. I think that was the mostly emotional charged part of this entire second installment, with a second the Betrayal that came to the end. The pinnacle of intensity and what made me so sad in the end, but so very much-needed to give the story the push and reason to move on. As much as I saw the need for it, I must admit I close the book with the thought “poor Kendras.”

Overall, it was a great sequel to the first book however, for me it didn’t quite shake me like the first one. I loved it however and I’m definitely now more interested on the third book of the series. It is now that Kendras will rise and I can’t wait for it. As for this one, it’s quite worth reading it, with amazing scenes of battle and secret missions, the blood we’ve come to expect from the Scorpions, and a great deal of conspiracy and back-stabbing. Recommended!