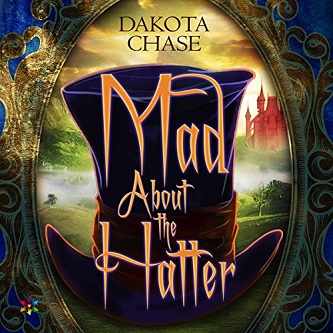 Title: Mad About the Hatter

Blurb: This isn’t his sister’s Wonderland….

Henry never believed his older sister Alice’s fantastic tales about the world down the rabbit hole. When he’s whisked away to the bizarre land, his best chance for escape is to ally himself with the person called the Mad Hatter. Hatter – an odd but strangely attractive fellow – just wants to avoid execution. If that means delivering “Boy Alice” to the Queen of Hearts at her Red Castle, Hatter will do what he has to do to stay alive. It doesn’t matter if Henry and Hatter find each oth-er intolerable. They’re stuck with each other.

Along their journey, Henry and Hatter must confront what they’ve always accepted as truth. As dislike grows into tolerance and something like friendship, the young men see the chance for a closer relationship. But Wonderland is a dangerous place, and first they have to get away with their lives.

Review: Mad About the Hatter is an audio for a book that I remember reading a couple years ago. I remember that I loved reading the book and was totally keen on listening to the audio.

Dakota Chase isn’t really an author on my radar and I think this was the first time I had read the author’s work initially a couple years ago. But the writing is fun and even though it is a fantasy based on a classic book, the story doesn’t feel completely ridiculous. The narration was also awesome. I don’t actually remember the narrator’s name, although when I heard him talking I know I’ve heard his narration at least once before and like this time, I am sure it was a pleasing audio experience. I particularly loved the voices that Froomkin gave these classic characters that we know so well, especially Hatter, the Tweedles and the Chesire Cat.

Mad About the Hatter is a story that is about a sweet, quiet romance with a dash of friendship and adventure, all set in the world of Lewis Carrol’s Alice in Wonderland. It’s an interesting spin on the classic, where the events of the book take place after Alice in Wonderland and Through the Looking Glass. The story itself is more of an young adult read than anything else because this story is essentially eighteen year old Henry coming to terms with his own identity – having a coming of age adventure and falling in love.

Anyone who likes urban fantasies and new takes on classic tales would enjoy this story, although if you’re dead set against young adult fiction, then this probably isn’t what you’re looking for.

The story starts with Henry. He and his sister, Alice, do not have an easy relationship, despite the fact that their only other family is their possibly alcoholic father and mysterious/random Uncle Leonard. The main problem is that Alice likes to talk about her time in Wonderland which Henry knows that logically could not have happened at all. I was siding with Henry there although Henry is a bit of brat at the start of this book. Then his sister gave him punch and Henry’s world changes to the surreal.

We meet up with the Mad Hatter. The Red Queen is getting more insane by the day and is having people beheaded left, right and centre. When Hatter is sent after “Boy Alice”, we have the quirky adventure throughout Wonderland not unlike the original. We also meet other familiar characters, aside from the Red Queen, including Tweedledee and Tweedledum, the Cheshire Cat as well as that opium fiend Caterpillar.

There is not a lot of romance, there is very little in the way of sex but there are some rather sweet moments between Hatter and Henry. I particularly liked the end but it left me thinking “but I want more!!!!” but in a totally good way.