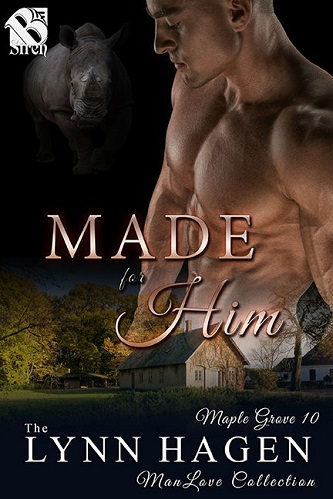 Title: Made for Him

Blurb: Jude Pearson is nearly killed twice, and now all he wants is to be left alone. But his ex-coven leader has different plans. He’s hired an assassin to kill Jude for something Jude had no control over. Things become worse when Deputy Roy Benton invites Jude out, and Jude reluctantly accepts the invitation. He has no clue his mate is the cook at the tavern. There was just one problem. Reese detests vampires.

Reese Baas lost his little brother to a vampire attack a decade ago, and the pain is still fresh. When a panicked man runs into the kitchen at the tavern, Reese is shocked to find out Jude is his mate. Jude also has trouble on his heels, and Reese is torn between helping his mate and walking away. The decision is taken out of his hands when Jude becomes pregnant and the assassin closes in on them.

Review: Each book in the Maple Grove collection features a new romantic couple. To enjoy the overall story arc I would suggest reading them in sequential order. This story is connect to the Brac Pack series, which has many branched off series.

Jude is a sweet heart of a vampire. He has not had an easy life. He had almost been killed twice and one of those times was by his own uncle. He had killed that asshat but now his family wanted him dead. When a friend asks him to hang out with him, it leads him to someone he had not expected, his mate.

Reese is a rhino shifter who like many rhino’s has a temper but manages to keep it down. It would seem his mate had a way of driving him crazy though. What neither expected was Jude to become pregnant.

Pretty interesting story going on with this one. I have always liked reading this author’s work and have not been let down. It always has a serious tone to it but there is so much humor in it one would not expect it. It caught my attention from the start and kept it all the way to the end.

I had a blast reading it and look forward to reading the next story. I can guarantee that it will be read many times over.