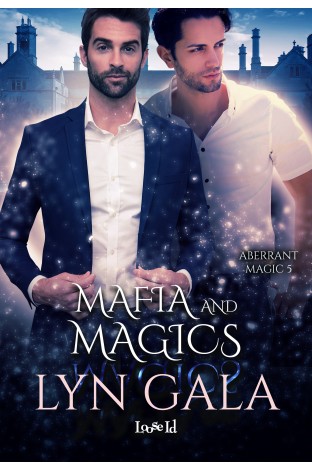 Blurb: Angel Zamora has always looked out for numero uno, even after getting sent to prison for robbing a convenience store at knife point. But now two crazy feds show up to tell him he has undeveloped magic. And they want him to inform on a group that has been recruiting and disposing of magic users. When Angel agrees, he expects to play the feds until he can make his own escape plans.

However, once he’s inside the mafia and developing his Talent, he starts to realize that he’s not as concerned about his own skin as he is young Matteo. The only son of the mob boss Mr. Luschese, Matt is even more trapped than Angel. His hot temper, disdain for authority, and deeply in-the-closet attitudes are all so familiar that Angel aches for the young man. A relationship that starts with Angel seeking one more potential advantage quickly turns into Angel’s worst nightmare–a deep sense of commitment to another human being. Escape routes are closing, and Angel fears he is going to end up one more body dumped in the river…and if Angel plays this wrong, Matt could die with him.

Review: I loved this new couple. Don’t get me wrong I loved Kavon and Darren but at the same time I was getting bored reading about only them as the mc’s so this was refreshing.

Angel, an ex con is recruited by Darren and Rima to be an informant. His task, to infiltrate the Luschesces mafia group that recruits the talented and if they refuse, kill them. This is where he meets Matteo, the mob boss’ son.

I really enjoyed watching these two men traverse in a dangerous world they are in. Some scenes are cring worthy as Angel adjusts to his magic and is tested in his new abilities by the mob. Matt for his part is nothing like his father which I found refreshing.

All in all it was a wonderful start to new characters and new aspects.