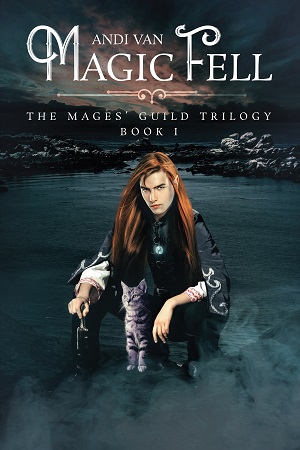 Blurb: Past and present are about to collide, and the world will never be the same.

Magic has been missing from the world for a millennium, and it’s needed now more than ever. It falls to young Tasis Kadara to revive the fabled Mages’ Guild of the Dragon’s Claw. But in a culture where arcane power is forbidden and practitioners are executed, Tasis will have to keep his own aptitude for magic secret. With nothing to direct them besides bizarre dreams and a mysterious cat, Tasis and his sister Zaree undertake a quest to discover the hidden island that was once home to the guild.

Kelwin Tiovolk departs his village following his mentor’s suggestion. As an elf wandering into human civilization, he’s in danger simply for being who he is. A brawl at an inn leads him straight into the path of the young man he’s been dreaming about, and he’s compelled to help Tasis and his sister any way he can. Together, the trio might have a chance of accomplishing their mission—or the attempt might kill them.

Review: Tasis starts having dreams that seem very real to him after his mother passes. With his sister Zaree the two set off to find an island that neither has heard of until now. The Dragon’s Claw is where The Mage’ Guild once was until a power ma king tried to take the magic by force. The results were catastrophic.

The adventure was well written with Tasis and Zaree facing danger and meeting new allies along the way. Kelwin accompanies the two when he finds out where they are headed. Zelwin and Tasis made a cute couple but there was no real romance in the story. Tasis finds out who he is actually related to and what his role is in the grand scheme of things.

I loved how the story progressed. The adventure was awesome with it’s twists and turns and eye opening dreams. A wonderful read with plenty of details surrounding the dragon’s claw and explanations regarding the past and what happened.