Hi guys! We have Andi Van popping in today with her upcoming release Magic Wept, we have a brilliant guest post from Andi, a great excerpt and a fantastic giveaway where three lucky winners can win a plush purple kitty-cat and an ecopy of Magic Wept. So guys check out the post and pop on over to Andi’s website to enter the giveaway! ❤ ~Pixie~ 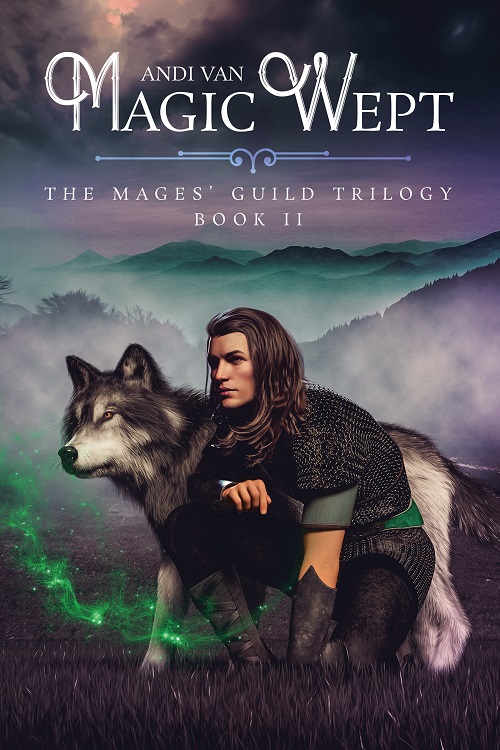 Jorget has no surname, no blood kin, and no hope of using his magical ability while he remains at Archai Castle, where the mad king reigns. With magic still outlawed, every experiment he performs could cost him his life. So when his mentor, the royal priest Denekk, is ordered to send Jorget on a journey to find a magical weapon, the young man jumps at the chance to prove himself. What he doesn’t realize is that things are never as simple as they seem.

Once upon a time (the early 1990s), before the dawn of the internet as we know it, there was a BBS (that’s “Bulletin Board System”, and we had to use actual phone lines to dial into them via modem) in which I ran a role-playing group set in a mages’ guild. My character’s name was Trivintaie, and she was a redheaded mage with a penchant for mischief.

Yes, she was THAT Triv. The same Triv that starts off the whole Mages’ Guild Trilogy.

When I decided to revive her and write the trilogy, I knew I couldn’t make her the main character. Her time had passed, and too many other people had taken part in creating her guild for it to really be mine. So I set the trilogy a thousand years in the future and gave her world a new hero.

What I didn’t expect was that I’d pack it with such a diverse set of characters, most of which reflecting some part of the rainbow. It was completely unintentional, but once I realized it was happening, I was thrilled. One of my goals was to give young adults—and adults not quite so young—characters that maybe they could identify with in a way they might not have been able to before.

So I’d like to introduce you all to some of the new characters in the second book of the trilogy, Magic Wept.

But before that, I wanted to let you all know that there is indeed a giveaway. I will be randomly generating three winners on September 30th, all of whom will receive a plush purple cat (because nothing says magic like a K’yerin plushie—Tasis’ familiar is just full of himself enough to agree with that sentiment) and an ebook copy of Magic Wept. You can enter the giveaway at http://andivan.com/magic-wept-blog-tour/.

And now, on to the characters.

Today I’m going to start with Jorget. Jorget is the apprentice/student of Denekk, the mad king’s priest, who you met in Magic Fell. He’s awkward, clumsy, and has a habit of constantly sticking his foot in his mouth because he doesn’t think before he speaks.

Jorget is meant to represent allies. But not just any kind of ally. Jorget is meant to represent that one friend we all seem to have that means well but is still learning what should or should not be brought up in terms of someone’s gender identity or sexuality. I did that intentionally, because I wanted to show him growing to become the friend we all need, as opposed to the friend we put up with. I wanted to make a point that people can learn. They just need to be educated.

I’m not saying that’s the case with everyone. Obviously there will always be people who refuse to learn. That’s just the way the world works. I showed that in the first book with Zaree’s older brother, Sireti, which was one of the reasons I was glad to have the opportunity to display the opposite side of that attitude with Jorget.

And don’t get me wrong. Yeah, Jorget learns to be an ally, but he’s always kind of an adorkable idiot. Through the second and third book, I found myself laughing and muttering an affectionate “Oh my god, you’re such a dumbass,” when I’d be writing scenes involving him. He was a lot of fun.

I could have gone two ways when I was choosing an excerpt for Jorget. I could have gone with something from the beginning of the book, where he still hasn’t learned what not to say, or I could have shown how he was once he’d broadened his viewpoint a little.

I went with the beginning. There’s something about reading how he embarrasses himself that makes me cackle. Before Jorget could answer, the mirror cleared, and he could see… a cat. It looked oddly purple, and he wondered if there was something wrong with the mirror to make the color off like that.

“K’yerin,” Denekk said, his voice brimming with respect. For a cat. Jorget began to worry for his mentor’s mental state. “I need to speak to Tasis. It’s vital.”

The cat, amazingly, seemed to nod in understanding before turning his gaze right at Jorget and narrowing his eyes. Jorget could have sworn the thing looked suspicious.

“He’s part of this,” Denekk said, much to Jorget’s surprise. “He’s training under me. Please, K’yerin.”

K’yerin let out a low growl, making Jorget lean away from the mirror despite the fact the cat couldn’t hurt him through the piece of glass. Or could it? Then the feline was out of view, and Jorget turned all his attention on Denekk. “What do you mean I’m part of this? Part of what?”

“Wait,” Denekk told him. “I don’t want to have to say this more than once. We’ll wait for K’yerin to fetch Tasis.”

Denekk gave him another stern look. “K’yerin is not merely a cat,” he said, his tone firm. “As you’ll find out.”

Before Jorget could finish, there was a sound from the direction of the mirror, and he turned to see someone moving into view. The girl was pretty enough with her long red hair, and obviously an elf with her pointed ears, but Denekk had clearly mentioned Tasis being a he, not a she. This couldn’t be the leader. Maybe he was busy.

“Wait a second,” Jorget interrupted, pointing at the mirror as he turned to the priest. “Tasis is a girl?”

Denekk gave him a horrified look and began to stutter an apology to the person in the mirror, but the redhead groaned.

“Seriously?” Tasis exclaimed, and Jorget felt like curling up and dying at the obviously male voice. “I swear on the Ancient Grendir’s left testicle I’m going to grow a damn beard.”

“You’re an elf, love,” another voice said. There was obviously someone in the room with Tasis, out of line of sight. “You’ll have a few hundred years before you have to worry about a beard.”

Tasis gave the unseen person a look of disgust and made a short gesture toward the mirror.

There was a chuckle, and another elf—this one actually looked male—stepped into the line of view. “Hello, Denekk,” he said before turning his attention to Jorget. “Trust me, Tasis is not female. I’ve checked.” He grinned at Tasis’s groan of embarrassment and, much to Jorget’s shock, pressed a kiss to Tasis’s temple before moving out of view again.

Jorget opened his mouth to say something, but Denekk growled. “Don’t,” he warned. “You’ve embarrassed me enough for one night.”

“Try not to be too hard on him,” Tasis said, looking less peeved at being mistaken for a girl. “It’s not like it’s the first time someone’s made that mistake, and he’s not used to cultures that accept all pairings.” He focused on Jorget and gave him a short nod. “Yes, Kelwin and I are a couple. That’s perfectly acceptable in elven society, though it should be acceptable in every society. As a magic user, you’ll need an open mind, so you might want to work on that.”

Tasis waved a hand. “He’ll learn. What’s going on? Rin said you had something urgent to tell me.”

Denekk rubbed his face before letting his hand drop to the table. “The king called me in to see him this afternoon. He’s apparently heard of something that he’s convinced could be used against magic users. It sounded like some type of ancient weapon that’s said to be locked away in the mountains to the east. He’s tasked Reikos with getting a group of his best guards together to go hunt for it. And he’s informed me that it’s important that my student go with him.”

Andi Van is a foul-mouthed troublemaker who lives near San Diego with a baseball bat that’s forever being used for things other than baseball, and a fondness for rum and caffeine (though not necessarily together).

Andi is fluent in three languages (English, sarcasm, and profanity), and takes pride in a highly developed—if somewhat bizarre—sense of humor.