Hi guys! We have Marshall Thornton popping in today with his new release Masc, we have a great excerpt and a brilliant giveaway so check out the post and enter the giveaway! ❤ ~Pixie~ 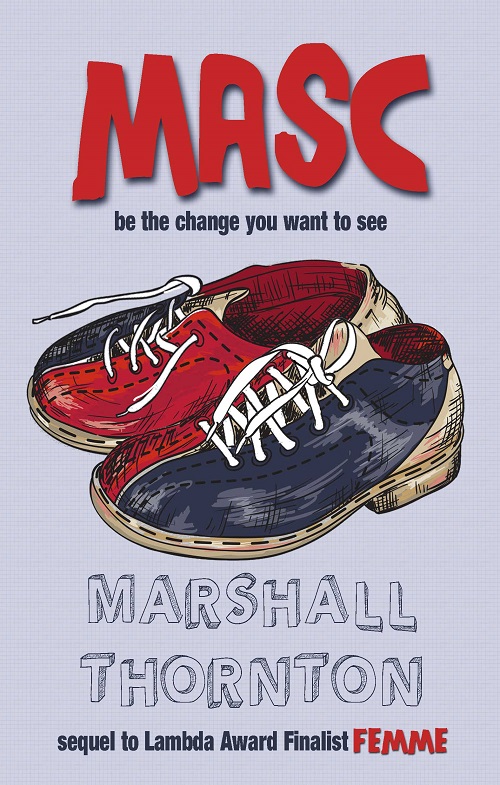 Lionel and Dog are back in this follow-up to the Lambda finalist, Femme. Almost six months have passed and, after taking an online quiz, Lionel believes their relationship is doomed because they have nothing in common. To save their relationship, the pair joins a gay bowling league and discovers that Lionel is an excellent, if somewhat eccentric bowler.

Meanwhile, Dog gets profiled in a work newsletter. He’s excited that he’s out at work but doesn’t immediately see that by fawning over Dog’s masculine nature he was also putting down all femme guys. Lionel takes it personally which leads to a crisis in their relationship. Attempting to make it up to Lionel, Dog attempts to make a grand gesture which backfires spectacularly.

Will the two manage to put things right? And will a night in jail, a morning of drag bingo, an afternoon of day drinking, and a month of moping make things better or worse?

Crap, crap and double crap. Lionel and I were munching on pizza while watching old episodes of Will & Grace, since I’d slept through most of his ‘classic’ movies. Well, actually, I was the one watching Will & Grace; he was reading something on the laptop I’d given him after he’d admitted lying about having a GED.

“Why would you lie about something like that?” I’d asked at the time.

“Maybe forgot isn’t the right word. In order to get a job I had to tell people I finished high school. Did you know that if you tell a lie five times it becomes the truth?”

I did not know that.

And I was tempted to take the laptop back, since all he seemed to be doing with it was reading weird things on the Internet, when what I really wanted him to do was study for the GED so he could go to college and do something, anything with his life. I mean, I knew he was smarter than me, so he shouldn’t spend his life as the day bartender at a sleazy straight bar. He should be something.

Anyway, during this scene where Grace was trapped outside of the apartment on a window ledge because she knew some really bad thing about the guy Will was dating, I forget what exactly, Lionel all of a sudden yelled my name, “Dog!”

“What? Is something wrong?”

“I know things seem terrible, but we’ve had bad presidents before and things have—”

“Lionel, why are you even on the computer? You should be watching the show.”

“I’ve seen this episode. Ten times. It’s the one where Will and Grace realize they’re meant to be together even though they’ll never have sex.”

I was pretty sure that was what most of the episodes were about, but I knew better than to say so.

“Dog, according to this our relationship is perfect except that it will never last because we have nothing in common.”

“According to wha— Wait. That doesn’t make sense. If our relationship is perfect, it will last.” That seemed really logical to me.

“We have to do something. We have nothing in common.”

“Does that really matter?”

“Of course it matters. What are we going to do when we’re old and gray and stop having sex?”

“Why would we stop having sex? My parents still have sex and they’re like sixty.” He made a disgusted face and asked, “How do you know that?”

“Well, I know when my parents were born, and I just have to add my—”

“No, how do you know they still have sex?”

“My mother tells Maddy and Maddy tells me.”

“Your poor father,” Lionel said. “Okay, back on point. We need more things in common. And it can’t be sex.”

“We have lots in common,” I said. “We both like to watch TV, for example.” Marshall Thornton is known for the Lambda Award-winning Boystown Mysteries. His comedic novels include The Ghost Slept Over, My Favorite Uncle and the Lambda Finalist for Gay Romance, Femme. Marshall holds an MFA in Screenwriting from UCLA and has had plays produced in both Chicago and Los Angeles and stories published in The James White Review and Frontier Magazine. Win a Audio book of The Ghost Who Slept Over!