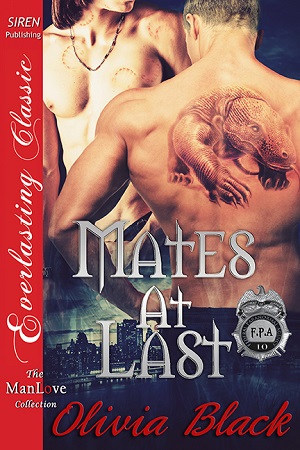 Blurb: Jeremy Myde is a shifter and FPA agent. When a new blood serum, with the ability to change humans into vampires, is discovered, Jeremy helps the team investigate. During the course of the investigation, Jeremy faces several obstacles. The most challenging of which is his mate.

Although Jeremy is desperate to mark and claim Roman, he keeps the young man at arm’s length afraid to make the final step.

Roman Ulanski has been living with Jeremy since he was rescued by the FPA. After recovering from the physical and emotional abuse he endured at the hands of a rogue shifter, Roman is finally ready to move on with his life. He wants to leave the past where it belongs: in the past. The only problem is that his mate still treats him as though he’s fragile. To prove his strength, Roman starts training to become an FPA agent.

Jeremy is a FPA agent and a shifter, he remembers when he found Roman and the shape he was in. Roman had been raped, beaten, and starved. The moment his friend brought him out, Jeremy knew that he had found his mate. He was just afraid to claim the man due to what had happened. He didn’t want to scare or hurt his little mate. However his lizard knew that the man was his mate, and wasn’t letting him out of his sight.

Roman remembered the time of his capture, but that did not mean he was going to let it define him. He wanted his mate to claim him, and if becoming an agent would help to prove he was strong then so be it.

The story is well rounded and fully developed. The characters are charming, fierce and damn sexy. It caught my attention from the moment I started reading and kept it all the way to the end. I got a big kick out of Jeremy’s animal side, what a cutie, for a very big lizard. This is probably one of my favorite types of series, full of action and excitement, some hot sex and add in the danger and damn if I am not eating it up.

I had a blast reading this and can not wait to get my hands on the next book. I would definitely recommend this.