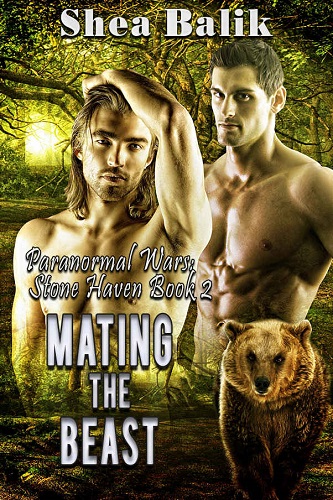 Blurb: Jason Jachovich never dreamed he’d be sold to the Psy only to be turned into a monster from an old Hollywood movie. When the Psy try to use him and the other humans they changed in a war with other paranormals, Jason manages to get free, only to watch as the others like him die in a war they didn’t want to be a part of.

This is the second edition of the original 2014 release. Although there are no significant changes to the story, it has been re-edited and revised.

Review: Jason, one of the Psy’s experiments, wakes up not knowing where he is. He only knows there is a lovely smell and a heavenly voice calling to him. At first he is terrified until the man tells him everything will be alright. Adam is happy he met his mate Jason but is concerned for his welfare at the same time. The two try and help the other understand things that are happening.

There is a lot that happens throughout this story. From confrontations others to rescue missions without planning there is an adrenaline rush as different characters play a role in bringing each scene to stunning life. Action packed and suspenseful this book packs a punch.

I loved everything about the book. I am looking forward to reading about the many characters that were rescued as well as Maui and Ian as in this story we find out they are mates.

One thought on “Mating the Beast by Shea Balik (2nd edition)”