Hi guys! We have Ian James Krender popping in today with his new updated re-release Murder In Torbaydos, we have a great excerpt and a brilliant $10 NineStar GC giveaway so check out the post and enter the giveaway! ❤ ~Pixie~ 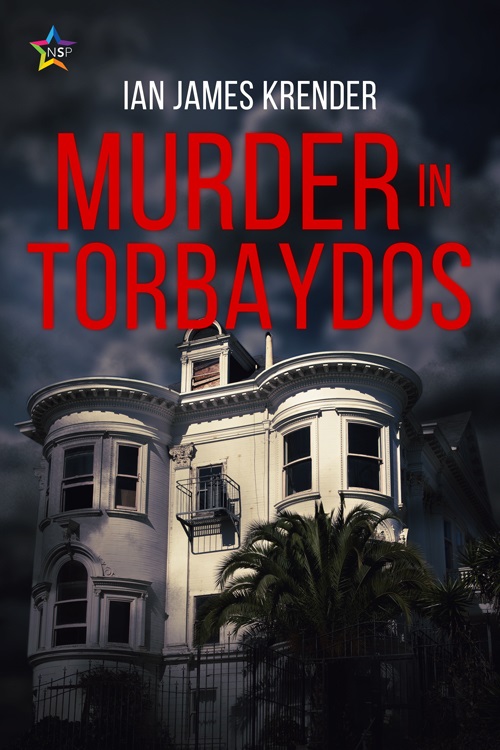 What could possibly go wrong when buying an old Victorian property by the seaside to remodel and run as a hotel. Plenty when the ghostly inhabitants from past generations want their say…

Marjorie, Stanley, and the apple of their eyes—their camp son Christopher, buy a leaky wreck, transforming it into a 1970s house of wonders. Marjorie’s Bejam inspired cuisine soon puts their seaside guesthouse on the tourist map. The utterly vile Marjorie’s ambitions for her henpecked husband will stop at nothing, even murder when it comes to climbing to the top.

Meanwhile, in the 2000s, gay couple, Jez and Graham—who have exquisite taste, escape the London rat race and buy the same building—now derelict and full of Marjorie’s draylon headboards and lace curtains. They refurbish it into a modern five-star hotel, the self-described jewel in the crown of English seaside hotels.

Jez, a shallow yet fabulous queen with a penchant for designer clothes, is soon led astray by the opportunity of television fame, a not-so-straight Bulgarian boxer, and a cocaine-fueled celebrity lifestyle—all overseen by the malevolent spirits, an evil bunch, determined to create misery for all.

Warning: scenes of graphic violence, the deaths of secondary characters, and references to drug addiction and cheating

I write this book in my twilight years. Though considerable time has passed since these tragic events occurred, there is no doubt it will be controversial. Some people will accuse me of profiteering or exploiting the dead. However, if I am privileged enough to see this work published, then I will donate any proceeds to charity. The money would be of little use to me now, in any case.

Perhaps writing this is a form of therapy. Goodness knows, I have spent much time reflecting on the ‘what ifs’. Over the years, I have learned to forgive myself. However, I will never forget the pain I have caused others through my poor decisions.

The accounts of my own actions are as accurate as I can recall, given the passage of time. Obviously, I was not alive in the earlier years this book is set. My interpretation of those events has been derived from old letters, press cuttings, and photographs. I have also been able to make use of the Wilsons’ diaries, posted to me some years ago. I especially thank the staff at Torquay Library for their patience in dealing with my correspondence. Despite this research, there are gaps, and I hope you will indulge me with a little poetic licence, concerning events in the 1970s and 1919.

It has been difficult for me to relive the events described in the following pages. I hope this book will put the record straight. I am not looking for forgiveness, or for popularity, and I warn you—what follows may be uncomfortable to read, but I swear it is the truth.

Chapter One
February 1919
The Kingsleys

February was unseasonably cold. It had been a harsh winter with bitter northeasterly winds. Pembroke House, Sir William and Lady Elizabeth Kingsley’s holiday home, was situated in the heart of the elegant seaside town of Torquay.

The villa was one of a handful overlooking Meadfoot Beach. A recently completed railway had made Torquay, with its relatively mild climate, something of a boomtown and a playground for the wealthy. Sir William’s late father had amassed a considerable fortune during the industrial revolution and commissioned Pembroke House in 1852.

Accessed through wrought-iron gates, a steep driveway led to this pristine cream building. At the front of the house, bay windows and a magnificent stained-glass entrance porch welcomed visitors. Pembroke House was a peaceful retreat from London society.

Sir William was seriously ill. His physician, Dr Ashcroft, suggested he be moved from London to Torquay, where the fresh, smog-free air might aid his recovery. He had accompanied Lady Elizabeth and her small entourage to Torquay. This included the family lawyer, James Partridge, and the head butler, Albert Henderson, all of whom surrounded William’s bed.

William sweated, his breathing was strained, and he drifted in and out of consciousness. His flesh was pallid, his yellowed eyes sunken into their sockets. Ashcroft listened to his heartbeat using a stethoscope. He looked concerned as he spoke to Lady Elizabeth.

“His heartbeat is erratic, and his blood pressure is dangerously low. You need to be prepared for the worst.”

“It just makes no sense. He’s fitter than men half his age.”

Lady Elizabeth was dressed in black, looking like a widow in waiting. Even though gaunt with worry, she was still pretty. She had a slim figure and a doll-like complexion, with long, wavy locks of brown hair. She was about twenty years younger than William and not a character to be crossed.

She nodded silently at Ashcroft, walked over to the fireplace, and gave the logs a firm prod. The fire spat and crackled in response, bathing the luxurious yet gloomy room in an orange glow. Despite her typically British stiff upper lip, Elizabeth broke into a sob. James Partridge hugged her tightly. It had not gone unnoticed by the house staff how close the pair had become. Partridge was incredibly handsome, and a notorious womaniser.

“You’ve done everything you possibly can,” Elizabeth said.

“It’s just a matter of time, now,” Ashcroft said. “If you want, I can give him a sedative to make his passing easier.”

Lady Elizabeth nodded her approval. Ashcroft opened his medical bag and took out a small tablet.

“Swallow this,” he said to Sir William. “It will help with the pain.”

He put the tablet on William’s tongue.

Mustering what little strength he had left, Sir William raised his right hand and beckoned Partridge to come closer.

“There is little time left for me,” he whispered into Partridge’s ear. “It’s painful that my last words are so full of hate.”

Partridge knelt beside the bed.

“Have you ever read Herman Melville’s story, Moby-Dick?”

“A shame. I know about you and my wife.”

James started to stand, but William grabbed him by his cravat and pulled him in close.

“You must think me a fool.”

“You think you got away with it.”

“In the words of Captain Ahab… To the last, I grapple with thee; From Hell’s heart, I stab at thee; For hate’s sake… I spit my last breath at thee.”

His grip weakened, and then his arm fell limply to the bed. His face became blank and expressionless.

Lady Elizabeth wiped away a tear before regaining her composure. She kissed Sir William on the forehead and moved towards Ashcroft, who was standing by the fire. He bowed his head respectfully.

The peace was shattered by a crystal decanter on the mantelpiece exploding, which soaked her dress in brandy.

“What on earth caused that?” she exclaimed.

The fire crackled angrily, and there was a loud bang. An ember spat out of the hearth and landed on Lady Elizabeth’s skirt, which erupted in flames. She screamed, flailing around like a rag doll shaken by a dog. Sir William’s nurse threw a blanket over her to smother the flames, but this caught fire too.

The eiderdown stuck to her, its melted remains clinging to her skin like wax. She lurched towards James and gripped him tightly as if possessed. They collapsed to the floor, ablaze, screaming, until Henderson threw a rug over them and patted them until the flames extinguished.

“Call for an ambulance,” Ashcroft ordered.

Lady Elizabeth was dead. Her corpse was charred beyond recognition; her beautiful locks of curly brown hair singed away. Her skin was blackened and smoked, making the bedroom smell like a barbeque. However, Partridge was still alive, just. He twitched in pain, moaning, his handsome looks ruined.

Ashcroft gave him a shot of morphine. He survived for a few minutes.

Ashcroft opened the window to let out the smoke. The icy wind had gained strength, causing the curtains to flap violently. He left the room, glancing back to survey the carnage behind him. Sir William sat upright in bed, his eyes open, as though he was still alive, scrutinising the scene in front of him. Lady Elizabeth and James Partridge were sprawled across the floor, smouldering. The picture would stay with those present for the rest of their lives. Juggling running a successful business with my writing finally met with success with the publication of my first novel in 2013. A spell in the police force provided huge writing inspiration, though I doubt many of my experiences would be believed. I live in Devon with my partner and our Labrador.