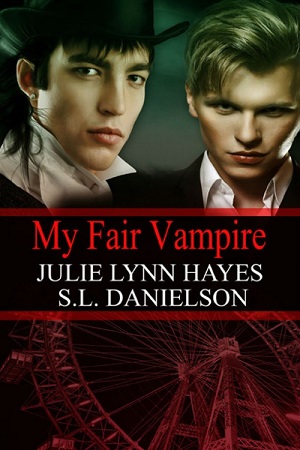 Blurb: Meet me in St. Louis, Louis, bite me at the Fair!

Hot dogs and ice cream cones and electricity—oh my! The 1904 World’s Fair has it all!

The world’s spotlight is firmly fixed on St. Louis, Missouri—gateway to the West and host of the Louisiana Purchase Exposition. Visitors have come from all points of the globe: to gape, to taste, to explore, and to enjoy the marvels which the World’s Fair has to offer.

William Deming is an ambitious young reporter from Utah. He sees a chance not only to visit the fair, but to make a name for himself by reporting on it. He takes a room in a boarding house close on Lindell Boulevard, close to the Fair itself. What he doesn’t count on is meeting Misha—a young and handsome Russian, whose aunt owns the boarding house.

Misha is something William has never encountered before—a vampire! Before he can wrap his head around Misha’s revelation, a man is discovered murdered at the Fair, and William wonders if his Misha is involved. The evidence is especially damning as there seems to have been a connection between the vampire and the victim. Will an old flame cause new problems for William and Misha? Will they find love at the World’s Fair? Or will theirs be doomed to be a fatal attraction?

Review: Misha lives his life as quietly as he can with the help of his aunt when a new boarder catches his eye. William has been sent to do a story on the first World Fair when his eye is caught by Misha and he decides that maybe he can do the story and still have some fun.

This is a well thought out story that has a good outline and plot. Misha has a somewhat lonely existence and he begins to long for something different. William is just covering the World Fair and falls into a dalliance with Misha. These two men seem to be a good fit for each other and fell for each other quickly and they were quite passionate towards each other.

I liked the slight mystery and the danger, but I thought that things fell into place too easily. The start of the book was a bit hard to get into but as it progressed it seemed less stiff.  It seemed contrived at times and there was one point that I really found hard to believe. I mean out of all those thousands of people they just decided it was Misha…for no reason at all.

I will recommend this to those who love historical, vampires, gentle sex and angst.