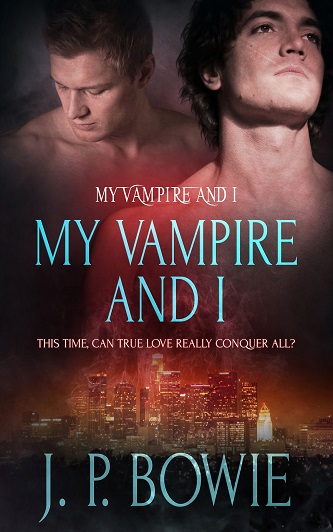 Title: My Vampire and I

Series: My Vampire and I 01

Blurb: When young Roger Folsom attends a costume party thrown by friends for his twenty-fourth birthday he is immediately captivated by Marcus Verano, a handsome stranger masquerading as a vampire—except Marcus is the real thing.

Spirited away to the vampire’s mansion, Roger is introduced to a new life of unabashed luxury, fascinating stories—and hot sex. Everything is going just fine for Roger, until his new lover’s old enemies show up seeking revenge, and Roger’s blood.

Determined to save one another from the gruesome deaths planned for them, they embark on an adventure that takes them from the weirdness of West Hollywood to the wildness of a vampire’s castle in the hills of Rome.

This time, can true love really conquer all?

Review: Rogers life changes forever when he meets Marcus, a centuries’ old vampire. The two hit it off immediately and learn about one another. Some of Marcus’ stories are sad in what he had been through. Amid their time together comes enemies from Marcus’ past that threaten to tear them apart.

I liked the actual story, it was engaging and quite entertaining. Roger was hilarious and sarcastic at times. The other characters throughout the book gave the story an added element to an already interesting story. However, I was annoyed by the fact that when Marcus and Roger would start talking eventually they would have sex before finishing the story they were telling. There was a lot of sex in this book.

I was also confused to the fact that Marcus said early in the story that D’Arcy was older than him but later in the book he claimed he was the older one so I was not sure which one was older. Aside from those things I enjoyed the story with it’s drama, action and suspense.