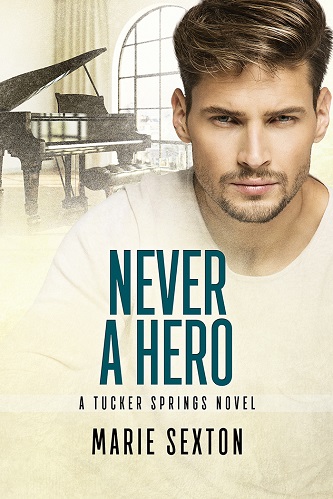 Blurb: Owen Meade is in need of a hero. Sheltered, ashamed, and ridiculed by his own mother for his sexuality, his stutter, and his congenital arm amputation, Owen lives like a hermit, rarely leaving his apartment. He hardly dares to hope for more… until veterinarian Nick Reynolds moves in downstairs.

Charming, handsome Nick steals past Owen’s defenses and makes him feel almost normal. Meeting his fiery, determined little sister, June, who was born with a similar amputation, helps too. June always seems to get her way—she even convinces Owen to sign up for piano lessons with her. Suddenly the only thing standing between Owen and his perfect life is Nick. No matter how much he flirts, how attracted to Owen he seems to be, or how much time they spend together, Nick always pulls away.

Caught between his mother’s contempt and Nick’s stubbornness, Owen makes a decision. It’s time to be the hero of his own story, and that means going after what he wants: not just Nick, but the full life he deserves.

Review: I don’t know where to start so I think I will go with AMAZING! That pretty much sums up the characters and the story.

Owen has been infatuated with his neighbor since he moved to Tucker Springs. When she suddenly moves he is hurt but more that he no longer gets to hear the piano that soothed him nightly. Owen has one arm due to a birth defect and a mother that left him with no confidence so he works from home and is a hermit. When Nick moves in below him and isn’t put off by his arm his life begins to change. Nick introduces him to his sister who also has the same birth defect but the opposite arm and she handles it the opposite of Owen.

Nick also has a secret that makes him keep men at a distance and won’t give into a relationship, but he finds Owen hard to resist.

This is such a lovely story of two men each with his own issue that seriously affects his life. I adored Nick and was so glad to finally get his story. It was better than I hoped for. The story has a lot of angst, some sad moments but I loved the ending. It’s the first in a while that left me laughing.

If you like stories about broken men, a few surprises, unlikely heroes and an allover great romance I highly recommend this book.

If you haven’t read any of the other Tucker Springs books don’t worry each stands alone but I highly recommend them all.