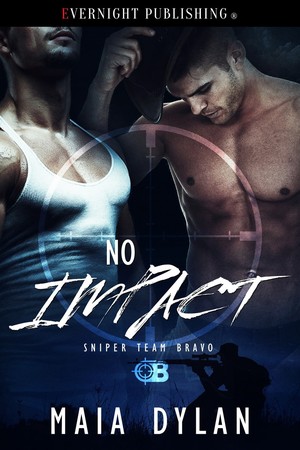 Blurb:  No impact on the target is the call that a sniper has missed, that their position is now compromised, and the firestorm it can bring could ultimately cost them their lives.

Riley Marksmen has wanted Marcel Cross from the moment they first met. He just had to convince Marcel that he wanted Riley just as bad. When his first attempt with Marcel results in no impact, he is convinced that a future with Marcel is worth the risk of trying again.

Marcel knows there is something between him and Riley. He just has to find the courage to take the gamble in the first place. When secrets are discovered, and a threat is revealed, it jeopardizes what they’ve only just started to build.

Can they find a way to the future they’ve targeted, or will their risk leave No Impact?

Review:  Each book in the Sniper Team Bravo collection features a new romantic couple. To enjoy the overall story arc and crossover characters, I would recommend reading the series in sequential order.

I came across Maia when the first book in this series came out and I have to say that she does have an amazing gift at telling a story.  I always did love a good man in a uniform who is sexy, loyal and damn good with a gun.  I also liked the fact that in the blurb she explains a bit about what the title itself means.  In this book, no impact means a sniper has missed his target and all hell is about to happen.

It is not only an entertaining tale, but is full of action, hot sex and danger.  There is just a hint of humor in it that makes it even better.  Usually it is when Sam gets called Pretty Boy, thanks to Finn but damn it is funny all the same.  Nicknames do stick with you sometimes.

Riley has taken the bid to build for the sniper team bravo unit, but he has a secret at the real reason.  His grandmother was the true owner of the land and had tried to leave it to his father.  The grandmother and his father should be rotting in hell from the way they were with him.  He wanted to help build a happy place instead of what it once was.  That secret might just cost him though.  He wants Marcel and his first time at getting the man was a shot down, hence the name.

Marcel wants the man and has wanted him from the moment he first saw him.  However he can’t stand a liar or someone that keeps secrets.  And it is one that his sexy man is hiding from him that might blow their new, fresh relationship up.  That, and the fact that someone wants them to not only stop building but cost him Riley’s life.

This is a very intriguing story that was quite a bit of fun to read.  I had to actually go back and read the whole series over once more.  I loved the characters and the way they are with each other.  They might be a sniper team but they were also a tight family.  I loved that about them and was glad that the author turned it that way.