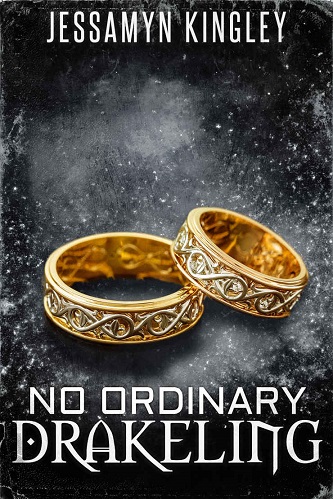 Blurb: Emperor Chrysander Draconis rules not only the dragons but the entire Council of Sorcery and Shifters. From the moment Fate selected him, he has devoted himself to ensuring his people thrive and prosper. His life revolves around duty; nothing stands in the way of his dedication to his job. One of the most prominent issues on Chrysander’s plate is the lack of hybrid drakelings that have survived the road from man to beast. When he receives word that one such rare soul is living in an obscure tribe, he races to help.

Ellery of the Fen-Lynthi elves is different from the rest of his people. He does not understand why his ears are shorter, why he stands taller than the others. Then his mother explains why the other children mock him and call him a mongrel: his father, a dragon, abandoned her the moment he learned of Ellery’s impending birth. With his mother’s often-fragile mental state, Ellery does not know if he can trust her words, but they are all he has. He spends his days ostracized, doing what he can to improve his lot.

Chrysander is overjoyed to find his mate among the Fen-Lynthi, but when it is confirmed that Ellery is half dragon, he is terrified Ellery will be ripped apart by the beast inside him. Regardless, Chrysander proceeds with their matebond ceremony, though he delays the event, believing duty demands they bypass elven tradition. This troubles Ellery, and he wonders if moving forward is what Chrysander truly wants. Their schedules present them with little opportunity to spend time together, which gives him further cause for worry. If that isn’t enough, Ellery is apprehensive over his new role as emperor. Chrysander and Ellery must confront their fears and learn to face the world as a united and loving front. In doing so, not only will they be able to defy the impossible, but they will change the world.

Review: I loved this story. Chrysander finally gets his story and meets his mate Ellery. However he his duties get in the way of their mating but Ellery just takes it in stride. These two needed to talk to another. They only seemed to catch snatches of time with each other in between meetings, shopping, etc. I really felt for Ellery but Ellery soon finds a best friend and a champion in Tiri, Zane’s mate.

I have to admit to Tiri stealing my heart in this book. I was incensed at the way his chieftain treated his people. I do hope they can save those left behind. Tiri was smart, stubborn, sarcastic and generally a happy person. I really loved how the author wove the story around these couples with all the twists and turns that were revealed the story flowed off the page. I really enjoyed the tension, the mystery and suspense that revolved around the group for one thing or another.

I have to admit to not caring for Wesley in this addition. I think he let his job go to his head and assumed everyone would just do what he said. I especially didn’t care for the things he said about Ellery or Tiri. But, I have all ideas he is about to find out what happens when you mess with dragons mates if the plan he devised at the end of the book follows through.

This series just keeps getting better and better with each new book. I am in awe of how well the story is told and the characters that are involved with each new thrilling read. My favorite series to date.