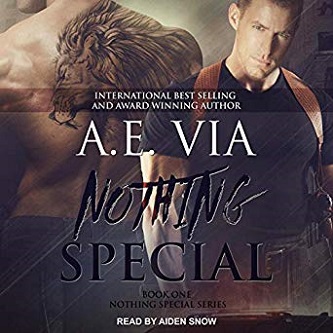 Blurb: Detective Cashel “Cash” Godfrey is big, tattooed, and angry so people typically keep their dis-tance. He’s fresh out of the police academy, however, no one is looking to partner with the six-foot-four beast with a huge chip on his shoulder and an inability to trust. When Cash scans the orientation room he wasn’t expecting to find sexy hazel eyes locked onto him. Eyes of the handsome Detective Leonidis “Leo” Day.

Leo is charming, witty, hilariously sarcastic and the only one that can make Cash smile. He’s proud, out, and one bad-ass detective.

Together, Cash and Leo become the most revered and successful narcotics detectives Atlanta’s ever seen. Able to communicate and understand each other, without even having to voice it, they quickly climb up the promotional ranks.

When Cash saves Leo’s life in a raid that turns deadly, Leo begins to see something in the big man that no one else does…something special. But Leo fears he’ll never break through the im-penetrable wall that protects Cash’s heart.

Review: Nothing Special is the first book in AE Via’s series of the same name. Being that I’ve not read much of Via’s work in the past, I had no idea what to expect, but the blurb seemed interesting, especially if you’re in hot cops and gritty action.

And wow! This was amazing. I loved this book from start to finish.

There were so many hot sex scenes, but they didn’t feel superfluous, in fact I was impressed because I normally hate too many sex scenes in books, especially because many of them don’t feel that they belong in the story and have just been slapped in for a sexy break between high points.

The story starts with Leonidis Day, or just Day. His first day on the force as a detective he is paired up with Cashel Godfrey, or God as he is better known. Day gets trouble from a fellow officer on his first day for being gay, but Day is a fighter and doesn’t stand down. He is also immediately aware of just how sexy his hulking, tattooed partner is. Four years later Day and God have become an unbeatable force in the drug squad. They’re known for their cowboy antics but no one can argue with their results. They are not only partners, they are also best friends.

But things change as their feelings have evolved from day one to the present and they are faced with having to admit to a few things. God and Day aren’t scared and Day is not about to lose his best friend when he knows that they are meant to be so much more. A couple life threatening instances create tension that neither can deny. Through all this, the sexual tension, their jobs and illness, we also get to know so much more about God and Day, more about their family and how this ties into their motivations as characters.

The plot and premise is actually quite simple, but there are so many moving parts that are so well executed, I was hooked from the start and was sad to see the end.

The characters are wonderful. As well as Day and God, there are also a number of secondary characters who are just as vital to the story as the MCs. Each of them are very well developed, we are given their backstory, we see them grow. Nothing Special is one of those books where I am just so happy because the characters are so well fleshed out, the character arcs makes sense as the story goes along so there aren’t any wild card scenes that don’t make as much sense as the rest of the book. The chemistry between Day and God is electric. It’s so easy to understand why they are such good partners and why it is so natural that their relationship evolved into something a lot more. I think I just have to leave it at that I love each everyone of Via’s characters.

The narration was as amazing as the book itself. I don’t think that I am familiar with the work of Aiden Snow. However, he has a tone and timbre that matches the gritty, dangerous feel of the book and the cops that put themselves in the line of fire to do their duty. His voices for Day and God are great and it was just a joy to listen to. I especially loved how he was able to convey the snarkiness and the caffeine junky that is so central to Day’s character. Day and God are both very strong men, and this is heard in the narration. Overall, a wonderful performance that I cannot fault.

I recommend this one to people that love hot cops, a story with a touch of danger, a lot of love and a heck of a lot of sex.