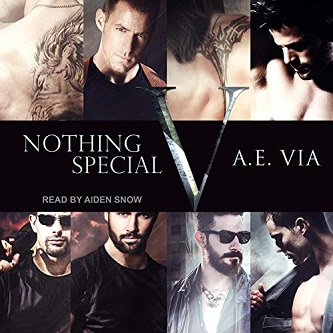 Blurb: Atlanta’s notorious narcotics task force is at it again. They are stronger, bigger, and better than ever. Especially when a city councilman sends RECON Marine Edwin Steele – who’s been black-listed from his Oakland department – to join the team.

Steele was skeptical about his new placement, but when he meets God’s technology special-ist/computer genius, “Tech”, he’s willing to give it his all, and he definitely shows and proves.
Tech is stunning. His sweater vest and khakis, a stark contrast to the blue-jeaned roughnecks he works with. A beautiful sheep amongst the wolves. Steel thinks there’s no way the brilliant man would be interested in a hardhead like him, but Tech has a few badass hidden talents of his own and manages to surprise him…surprise all of them.

Review: Nothing Special V is (obviously), the fifth book in AE Via’s Nothing Special series.
I have absolutely loved this series from the start, although I’ve not read it and only been listening to the audio. Which I at first found out, because this book has some very long and steamy sex scenes, which usually I find rather boring. However, Via does an excellent job of writing multiple, very explicit scenes into books that actually fit in the flow of story, as opposed to being crow-barred in because hey, let’s have characters have sex in stupid places (Via doesn’t do the latter, but it’s one of my pet hates in romances, erotic or otherwise).

The audio narration is performed by Aiden Snow, which summed up in one word is sublime. Each book, although has one couple which is the primary focus, features a whole cast of characters which become more complex and developed throughout the course of the books. At this point we’re talking seven or eight sets of lovers with a handful of other characters who have popped up more than once in the course of the series. What I love the most about Snow’s audio is how he gives these very complex characters distinctive voices and feels. I felt this more so in this book because at the end we have a character with an English accent pop up, and another with a Southern drawl also pop up. This was a totally amazing performance that reflected Snow’s skill and versatility to narrate a story and perform the characters in a way that does the writing justice.

Nothing Special V brings technical, computer and communications specialist for the Atlanta PD’s most successful narcotics squad, Tech. Tech joined the team as part of a deal, which Lieutenants God and Day helped him get a deal when he was caught hacking into government databases while trying to find his brother. Tech is smart as hell, he’s been to MIT and only got caught hacking that one time. He joined the unit as their tech specialist, but he continued to become a detective in his own right. However, being much younger than his colleagues, as well as having a much more slight build with significantly less muscle, means that he feels his team are over protective of him. But Tech has been working and training because it is his dream to become a field officer, as well as help with the technical side of things.

To make this more complicated, we multiple storylines from multiple characters. In particular, the first couple that started this series, God and Day, the leaders of the squad. After becoming engaged, and despite working together and living together, fears and insecurities have caused a breakdown in communication. While they aren’t all out brawling there is a lot of tension. I liked this particular aspect because not only did it reflect the characters past. I liked how the tension showed that things aren’t always rosy in a relationship, especially with the dangerous and stressful job they have, even though they have their HEA.

Lieutenant Godfrey of the APD isn’t took happy when he is forced to take a new member on his squad. They aren’t even recruiting and he and Day haven’t asked for more boots on the ground. But he has a new guy and that man is ex-marine, medal of honour recipient Steele. Since leaving the service Steele has found it difficult to find his place in a career as a police officer. But it is his uncle who pulls some pretty serious strings to join a team that would better fit him before Steele’s dependence on alcohol got any worse. Steele isn’t exactly happy that his uncle did what he did, despite being his only surviving family, and it also has Steele living in the same state as his uncle once more. Yet when he first lays eyes on Tech, he is instantly intrigued. Suddenly, his new job is looking better and better, and he finds out his uncle left out a few important details when he had shown Steele a video of the APD team in action.

The book is full of passionate love scenes, a number of comedic moments and plenty of action. This is a must read (or listen) series for anyone that loves to read about rough and tough law enforcement guys. They work and play hard. This is an ongoing story, so it’s vital to start this series from the start and not treat this as a standalone book.

The end of this audio also features a short story which involves the brother and the adopted son of some of our most beloved characters from the APD Narcotics squad. It was a nice little story, and while it’s removed from the world of cops and action, I really liked how well developed the romance and characters felt – both have changed a lot since we first met them in earlier novels of this series and have been written into very mature young men that reflect the values of the cops in their lives.

There is one more book in this series, the set up for it was laid towards the end of Nothing Special V, and I can’t wait to hear the audio for it and get what I’m sure will be another stellar performance by Aiden Snow.