Hi guys! We have debut author Brianna Kienitz stopping by today with the tour for her debut lesbian release Off Pitch, we have a brilliant guest post from Brianna, a great excerpt and a fantastic giveaway, so check out the post and enter the giveaway! <3 ~Pixie~ 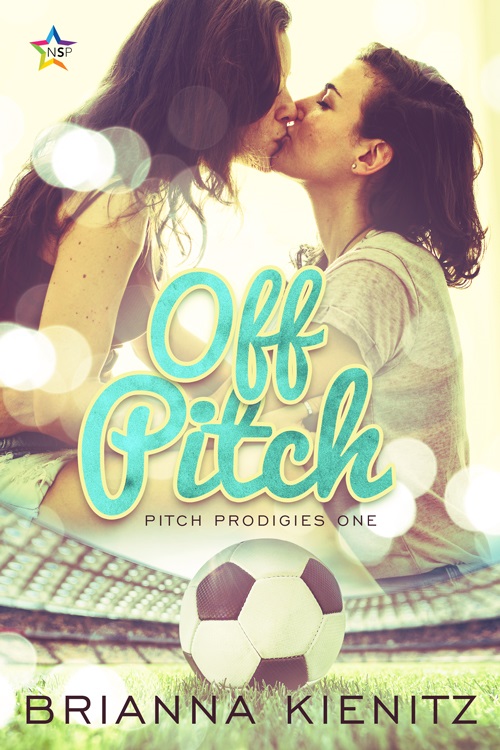 Soccer star Adeline Fahey has never taken an interest in the world outside of the pitch. The daughter of wealthy Irish immigrants, and a straight-A student, she sees nothing but the goal—finish her last two years of school and join a professional soccer team—no ifs, ands, or buts.

Then Gabriella Soto, a cello prodigy in her own right and the teaching assistant in Adeline’s dreaded Beginning Spanish class, walks onto her playing field.

After a drunken night in a T-rex costume boots their hearts onto a collision course, Adeline and Gabriella must tackle a field of school scandal, homophobic parents, and their own passionate career goals to have a shot at something more. In the face of so many obstacles, Adeline and Gabriella fear that their love may not be strong enough to score them the championship relationship they never knew they wanted.

I have been absolutely in love with Irish culture since I was young. I used to watch Irish step dancers with awe and fascination, bemoaning the fact that they had to wear skirts and dresses. I wanted so badly to be one of them, but I hated skirts and dresses that much. Celtic Tiger era Irish music was a staple in our house growing up, and I dragged my parents to every Irish event I could find. I remember dabbling in the tin whistle (my poor parents) and the bodhrán (a type of frame drum). It was a slow-burning passion that was always there, but I never took much notice of until I went off to college.

When I wound up at a school with one of the only accredited Irish Studies minors in the U.S., you better believe I signed up in a heartbeat. I studied Irish history, literature, folklore, music, language, and dance. I relished it all and managed to get in three trips to the old country before I graduated. I even barrelled my way through an internship that I set up for myself with the Irish Studies program. But the dance is what really got me.

It so happened that one of the Irish exchange students who was teaching at the program was a sean nós dancer. She taught the style for a semester and I took the class on a whim, knowing almost nothing about it upfront. It turns out that sean nós, or old style, Irish dance is a casual improvisational style that I took to like flame to a coal field. In just three months I, who had never danced in any official capacity before, fell head over heels for the style.

School ended but the dancing didn’t, and my feet haven’t stopped moving since. I kept learning, wormed my way in with a few of the local musicians, and have become a mainstay in the local Irish community. I teach lessons and pop into events whenever I can. There’s not much in my life that can rival my passion for Irish culture, and especially dancing, and all of the best moments in my life have included Irish culture in some form or other.

That passion always spill over into my writing whether I want it to or not. I couldn’t resist the urge to give Addie an Irish heritage (and my Irish surname). I’m still searching for that perfect idea that will allow me to write my passion for Ireland. Until then, you can be certain that you’ll see a little bit of Ireland in every one of my stories. I stood back to watch my handiwork as the soccer ball soared gracefully into the top-right corner of the goal, and a whistle blew from somewhere near the sideline to signal the end of practice. I sighed with contentment at my own spectacular skill and jogged toward the net to help clean up the mess of balls that littered the goal area. My bedeviled locks clung to my sweaty forehead as the summer sun beat down from the clear August sky and reflected off Lake Michigan, bathing the soccer field in a double-whammy heat wave.

“God, Adds! Do you ever let up? The season hasn’t even started yet,” Jessica whined from her position inside the goal.

“After fourteen years on the pitch together, I thought you’d have learned the answer to that question.” I gave her chestnut ponytail a playful tug, and she glared at me while she leaned casually against the goalpost.

“Well, there was that one time in first grade when we sat down in your living room and watched a movie.”

“Ha. Ha.” I rolled my eyes. Jessica Strobel and I had been best friends since first grade. Now, going into our junior year at Northwestern University, our relationship subsisted entirely on sarcasm and caffeine.

“I’ll tell you what. Since you managed to block almost 10 percent of my shots, and I know what a sore loser you are, I’ll take you out to coffee after we’re done here.”

“Wow, your highness. You are so magnanimous. Thank you soooooo much,” Jessica said with a flagrant eye roll. As much as we teased, I did feel a little guilty for dragging her to this practice. It was the last day before the start of fall classes, and while pre-semester practices weren’t mandatory, I was beginning to feel the stress of the inevitability of graduating in two years. I only had two seasons left to impress scouts and get picked up by a professional team, or risk becoming another college has-been. That was a fate to which I refused to succumb.

Jessica was, and always had been, my rock. She kept me grounded and sane, which was no small feat, given my penchant for being a high-strung ass much of the time. Her role in my life was much like that of the Roman slaves who whispered in Caesar’s ear, “Remember, thou art mortal,” as he paraded victorious. Not that I thought I was immortal but I did have a big head. Jessica was the person who kept my over-inflated ego from carrying me away like a hot-air balloon.

“Fahey! Strobel! Clean up now, chitchat later,” Coach barked from the sideline. “Some of us have places to be.”

“You heard the man.” Jessica gave me a pointed look. “You made this mess. You clean it up.” Without another word, she traipsed off toward the locker rooms. I sighed audibly, but silently smirked at her retreating back. She put me in my place like no one else could. It was only fair that I pick up. If I hadn’t dragged her to this voluntary practice, she would probably still be sitting in our shared apartment in her pajamas, watching whatever show she was currently obsessed with.

Once I had stuffed the plethora of soccer balls back into a bag, I hitched it over my shoulder and hauled it to the sideline where the coach waited impatiently. He seemed focused on whatever he was doing on his clipboard, so I didn’t dare disturb him. I threw the bag into the pile of soccer sundries for the equipment manager to deal with and started to trot toward the locker room. I was only a few steps along when the coach called after me.

“Hold up, Fahey. A word, please.” His tone was always gruff, but I had learned that his demeanor was more warm than harsh. His face seemed to bear a perpetual five-o’clock shadow, but his blue eyes were always bright beneath his bushy rich brown hair. It was as if he was built to be a coach, right down to his powerful physique and firm attitude.

“Gardener is gone,” he said without looking up from his clipboard.

“Yeah. I know.” I felt like he was stating the obvious. Cam Gardener had been the captain of Northwestern University’s women’s soccer team for the past two years. She had graduated last year, and we’d held a big going-away party for her and the other graduates at the end of the semester. I was perfectly aware that graduating meant she wouldn’t be on the team anymore.

“So, we’ll need a new captain.” Coach looked up at me finally. “It’ll be the ladies’ decision, ultimately, but I want it to be you.” His expression was calculating as he waited for me to respond.

“Oh…wow! I…thanks, Coach. I mean, it’s up to the others, obviously, but…yeah. I’ll think about it. Thank you. I’ll think about it,” I babbled and started to walk away. I felt Coach’s gaze weighing on the back of my strong shoulders, and my thoughts began to race. I had never really considered being captain of any team. I was an excellent player by any standards, and it wasn’t that I was selfish, or a showboat, but I was always focused on being the best I could be. I loved being part of a team, but I had never thought of myself as a leader.

The prospect was both exhilarating and daunting. I tried not to let it worry me as I undressed and showered in the locker room. Hopefully, Jessica was up for being a sounding board, and she could help me figure this whole situation out. She was always the level-headed one.

Brianna Kienitz (pronounced Kee-nits) started out as an avid reader of lesbian fiction on Wattpad. When reading no longer sated her appetite, she turned to writing the stories she craved. Brianna believes a good story should make you feel every moment deeply, whether it be laughing until it hurts, crying yourself dry, or screaming with unbridled rage. Her Wattpad works have been widely read and have received multiple awards from the Wattpad community. Her current project, Off Pitch, was named Wattpad LGBT Book of the Month in March 2017.

Brianna lives in Missoula, Montana, where she works as a slayer of transit demons, and a dance instructor. She spends most of her down time hiding in her Hobbit Hole with her wife and cat, curating T-rex costume GIF’s and pretending not to be socially awkward on the internet.