Hiya guys! We have Jere’ M. Fishback visiting today with his new release On the Way to San Jose, we have a short guest post from Jere’, a great excerpt and a brilliant giveaway, so check out the post and enter the giveaway! <3 ~Pixie~ 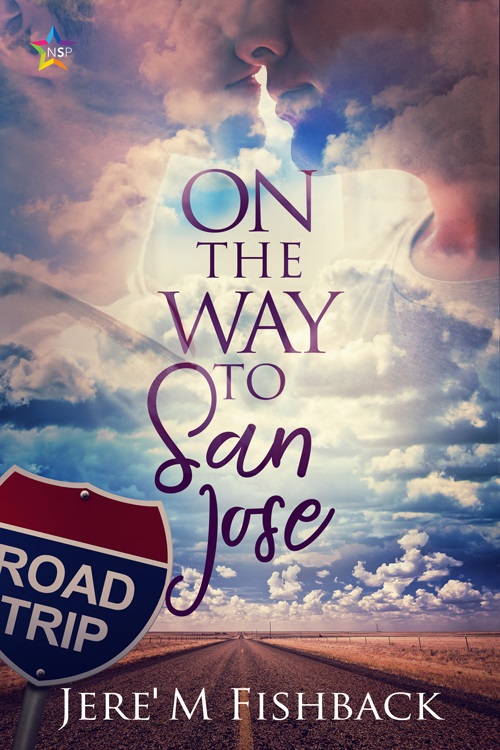 On The Way To San Jose

Terrence, a socially inept clarinetist whose driver’s license is suspended, needs his panel van driven from Orlando to San Jose, where he plans to start a new life. Levi’s a Stanford University student with Asperger’s Syndrome who answers Terrence’s Internet drive-away listing.

The two start out as strangers, but as their journey westward progresses a friendship is kindled, one that will change both boys’ lives in profound ways.

I’m passionate about a lot of things besides my writing. I love reading good fiction and nonfiction. I live in an island community on Florida’s Gulf Coast and I love walking along the shore every day. I enjoy playing my Ovation Legend acoustic guitar while I sing. Once in a while I perform at parties. I like gardening and caring for my property. About once a month I travel to Florida’s east coast to surf in the Atlantic Ocean; I’ve done that since I was in high school. Surfing is the closest thing to flying that I can think if, and it’s spiritually inspiring. I also enjoy live music venues, everything from concert halls to local bars. Finally, I’m passionate about my friends and loved ones; they mean everything to me. Need vehicle driven from Orlando to San Jose, CA. We can split the gas. I want to leave ASAP.

The listing provided a phone number.

Levi was twenty with an athletic build, cobalt eyes, and sandy hair that grew to his shoulders. He would start his third year at Stanford University in two weeks. He’d earned himself a full academic scholarship to the California school after graduating second in his class from Merritt Island High in Brevard County, Florida two years before.

But his life was not perfect.

When Levi was four years old, a child development specialist diagnosed him with a mild form of Asperger’s Syndrome, a disorder causing difficulties in social interaction. So, despite his high intelligence, Levi had never mastered the art of human communication. At school and home, he said little. He kept to himself and avoided eye contact. Conversations, even with family members, seemed like thickets to Levi. He had no close friends in either Brevard County or California, and until recently had never dated. In truth, he felt the happiest fishing by himself on his parents’ dock with a six-pack of beer at his side.

“Leave him alone,” his dad must have told Levi’s mother a thousand times. “It won’t be long before he figures himself out.”

Over summer break from Stanford, Levi had saved up three thousand dollars while working at his dad’s auto repair business on Merritt Island. He could have flown to California if he chose to, but didn’t want to waste part of his summer earnings on airfare, not with the problem he faced.

He’d met a girl named Taylor back in June. She waited tables at a beachfront grill that Levi sometimes patronized after surfing at the Cocoa Beach Pier. Taylor wasn’t the subtle type; right away she let Levi know she liked him. And Levi, being a socially artless boy, let her take him down a path he hadn’t walked before. One thing led to another, and now Taylor was pregnant.

While he studied his computer screen, Levi thought of the phone call he’d received from Taylor a month before: “As of yesterday, I was late on my period two weeks. I knew something was wrong, so I bought a testing kit, and now it’s for certain. What’ll we do?”

They discussed abortion. Taylor wasn’t inclined, as she was Catholic. Then they discussed marriage. Levi wasn’t inclined, as he was due back at Stanford. And though he didn’t tell her so, Taylor wasn’t exactly someone he’d want to share life with. A girl of limited intellect and shrill voice, she was rough around the edges, and Levi knew she’d wear the pants in whatever marriage she made—a union he wanted no part of.

So, the pregnancy floated in limbo.

Levi studied the Internet offer again. He had drive-away experience. At the end of last school year, he’d driven a retiree’s Crown Victoria from San Francisco to St. Petersburg. The old guy even kicked in two hundred bucks for gasoline. Levi made the cross-country trip in five days and delivered the car to the owner’s Florida condo where Levi’s mom picked him up and drove him to Florida’s east coast.

Making the three thousand mile trip by himself had not bothered him. He liked listening to the Crown Vic’s radio while traversing the never-ending brownness of southern Arizona and New Mexico, and then the ceaseless hill country of west Texas. The whole experience made him feel like the characters in one of his favorite books, On The Road by Jack Kerouac.

Now, seated at his parents’ kitchen table, Levi swung his gaze to a pair of double-hung windows with a view of the Indian River. He scratched his chin stubble while watching a shrimp boat cruise past his family’s dock, likely headed to Sebastian Inlet. The boat’s gauzy nets fluttered like dragonfly wings. Sunlight reflected in the boat’s wake that ruffled the river’s otherwise glassy surface. The time was close to 9:00 a.m. and already the day was heating up. By noon, the temperature would hit ninety-two; the relative humidity would likely reach a similar level, and Levi was glad he wasn’t working at the garage that day. He could stay in the air-conditioned comfort of his parents’ home.

When Levi punched up the phone number in the drive-away ad, a boy answered on the second ring, his voice a scratchy tenor. He answered Levi’s questions in a rapid-fire cadence, as though he couldn’t get the words out of his mouth fast enough.

“No, it doesn’t have air-conditioning.”

“Yeah, I’d be riding with you to San Jose. I can’t drive; my license is suspended.”

When the boy asked Levi how soon he could make the trip, Levi said, “I can leave the day after tomorrow. I’ll still need to pack my things.”

“The whole trip’s 2,800 miles,” the boy said. “The van gets twenty miles per gallon on the road, so we’ll burn about three hundred dollars’ worth of gas. And then we’ll need to rent motel rooms for at least four or five nights, so I figure—”

“I don’t do motels,” Levi interjected. “I tent camp in parks and cook my own meals on a propane stove; it saves a lot of money.”

The boy was silent for a moment. Then he said, “I guess I could sleep in the van, but I don’t really know how to cook.”

“We can split the cost of food,” Levi said. “I’ll cook and you can clean up afterward; how’s that?”

More silence, this time for about thirty seconds.

“Are you still there?” Levi said.

“Are you somebody I can trust? I mean, I’ve never done this before. How do I know you’re not some kind of psycho?”

Levi drew a breath and then let it out while he fingered the edge of his cell phone. “I go to college in northern California. I can show you my university ID. And I’m a good driver—I’ve never had a ticket—so you don’t have to worry about me. I’ll get you and your van there safely.”

They traded names and e-mail addresses. The boy’s name was Terrence DeVine; he lived in east Orlando, not far from the Orange Blossom Trail.

They agreed Levi’s mom could drop him off at Terrence’s house at 9:00 a.m. two days hence, a Thursday. “We can hit the road as soon as I load up my stuff,” Levi said. “We should make it to Alabama by dinnertime.”

Levi and Taylor faced each other in a booth at Taco City in south Cocoa Beach, just a mile from Patrick Air Force Base, where Taylor’s dad served. The restaurant was a Brevard County institution; it served tasty Mexican cuisine and draft beer so cold it numbed the back of your throat on the first swallow. The crowd that night was a mix of surfers, condo dwellers, young families with kids in high chairs, and servicemen sporting crew cuts.

Taylor looked nice enough in her short shorts and a tank top. Her straight brown hair was parted in the middle; it draped her shoulders. Her dark eyes focused on Levi while she toyed with her uneaten burrito.

“This is both our responsibilities,” she said. “I can’t believe you’re running off to California while I’m stuck here with this…situation.”

Levi lowered his gaze and rubbed his lips together while his brain churned. Why hadn’t he used a condom? He’d never even asked Taylor if she was on the pill before they started having sex. He’d just assumed as much, and how stupid was that?

Taylor glanced here and there. Then she said, “You could enroll at UCF’s campus in Cocoa. At least that way you’d be here when the baby arrives in April.”

Levi shook his head. “It’s not going to happen.”

“Stanford’s one of the best schools in the country. I won’t walk away from there just because you’re pregnant.”

Taylor squirmed on her bench while she twirled a strand of her hair around a finger. “You’re dumping this whole thing on me, you know, and it’s not fair.”

Levi wasn’t in the mood to argue, so he didn’t respond to Taylor’s last remark. Instead, he told her, “I’m leaving tomorrow, but I’ll call you from the road Friday night. Think again about an abortion; I’ll pay half.”

Taylor didn’t say anything; she only stared out a window at traffic passing on A-1-A. Jere’ M. Fishback is a former journalist and trial lawyer who now writes fiction full time. He lives with his partner Greg on a barrier island on Florida’s Gulf Coast. When he’s not writing, Jere’ enjoys reading, playing his guitar, jogging, swimming laps, fishing, and watching sunsets from his deck overlooking the Intracoastal Waterway.