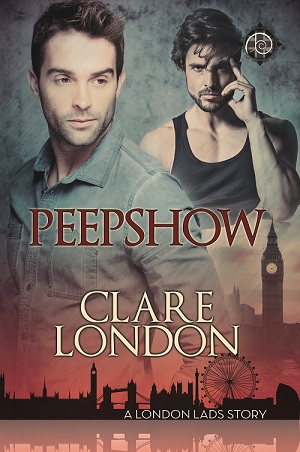 Blurb: Ever wanted to spy secretly on other people’s lives?

Ken doesn’t have a choice: his student summer job is manning the CCTV screens for the new central London shopping mall. But instead of spotting criminals or vandals, he becomes fascinated by a cute waiter from the local bistro who sneaks out to the backyard for his break—and plays sexy to the camera.

Is he an old friend, or just an anonymous exhibitionist? Should Ken be excited by this naughty peepshow, or will people think he’s a voyeuristic pervert? Poor Ken’s confused and thrilled in turn. It’s like living in one of the movies he’s studying at university. He knows the man can’t see him, yet Ken feels a connection of some kind. It all encourages Ken to continue with his guilt-ridden Waiter Watch.

Ken bears the suspense as long as he can, until a chance meeting and an abortive blind date provide the explanation to the secret assignations. But will this guide Ken to a real-life chance of romance?

This was first published in 2013 by Amber Quill Press/Amber Allure.

Review: Ken sits back and watches the camera wishing for some action.  Something to help him get through each day at work.  Well he gets more then he bargains for, when a sexy waiter keeps putting on a show for him.

This is a cute little story that makes for a nice hot read.  However for me, it is just a very short story that gives just a taste of what could be.  In a way it is a slow telling story, but for this story it could also be said to be fast paced.  I am afraid that for me, it just seemed to be too slow. The name of the book is actually right on and makes it funny as hell.  I enjoyed reading it, but wished it was a longer book with a bit more to it.  Other than my issues it is well told, pretty detailed and is a pretty good story.

I would recommend it to those who love a long time love story that neither party knew they had.  I will let you figure that one out on your own.