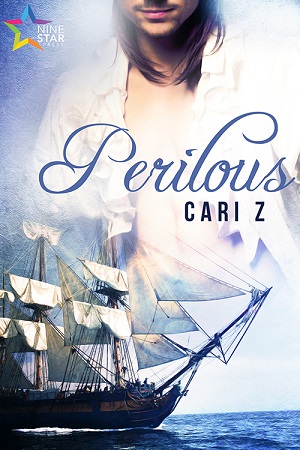 Blurb: In 1803, England declares war on France, staking the fates of two mighty empires against one another. Thousands of men serve in the British navy, hungry for distinction in the battle against Bonaparte.

One of them, Lieutenant Thomas Williams, thinks he knows what he wants out of life: prize money at sea, a career of decent note, and the means to maintain his independence when he leaves the navy. What he finds is service under Captain Christopher Knightly: a tactical genius, inveterate charmer, and the youngest son of a wealthy noble house.

Their unexpected and perilous love affair is a gamble against the odds, for in a time of war, nothing is sure to last. If the French don’t tear them apart, one slip in front of the wrong eyes or ears might. When the demands of Christopher’s family take him from Thomas’s side, he thinks it might be the best thing for his captain. Little does Tom realize just how far Christopher will go to return to him, and when life takes a turn for the worse, how much further he will go to save him.

Review: I am really at mixed feelings with this story. I will admit that I have never been a fan of historicals. It sounded really interesting, but to me it would have made for a better story if the female had been left out of it.

Tom is a lieutenant for the navy and is about to find himself at odds. In the time where being gay is a crime itself, he finds love with another man. During a war, love is what holds them together. When captured, love is what keeps him whole. It was a way for his escape. He meets a man that holds his heart but things will tear them apart. For Christopher is to marry another.

Christopher meets and falls in love with Tom, but his family has him already set to marry a nice young lady. Christopher is the captain of the Perilous, where as Tom is second in command. Now with this story it is basically told in three different parts, which for me didn’t really do it any justice. Tom is a sweet bit of sunrise and quite quirky to say the least. Christopher is like a captain should be well except for the part that is hidden.

It is a very action pact story that will tear you apart. There is war, torture, and some nasty surprises. It has explosions, cannons going off, some pretty cool sword fighting and even death, but their love holds true to the end. I still hated the cheating and yes I call it cheating. Don’t much care for the time period, but you fall in love, you stay true no matter what. The story made it seem like a meet, greet, in bed and boom. Which didn’t do the story any good, made it feel just a bit off. Although it did give you a happy ending which for me Tom needed the most.

I hate to also admit that I skimmed over parts of the story, even though the love part was fast pace, this story just felt too damn slow. For a novella, it should have felt just a bit faster. It is however a smooth story with lots of depth to it. The characters are well rounded and the heat that comes from them is off the charts.

Another part was the female’s reaction to the fact that both Tom and Christopher loved each other. She was gracious and just wanted to know if her soon to be husband could love her, and Tom gave her what she wanted to hear. So even though I can’t stand adding something like this in, it was done with taste. However I am still afraid that it made the story drop for me. I still think it is cheating when with one person but love another.