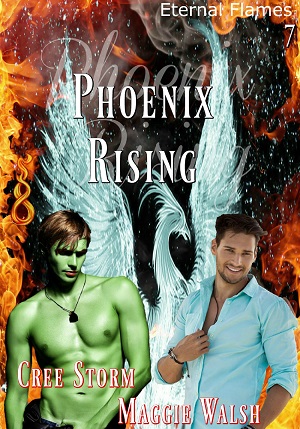 Blurb: Manny has had a hard life, but when he is taken in and adopted by Angelo and Morgan, Manny thinks his life is finally on track. That is, until he is kidnapped by a green man who tells Manny that he’s not who he and everyone else thinks he is. The truth of who Manny really is sends him spiraling out of control and he is terrified that when his new family finds out, that he will lose everything and everyone he loves.

Frankie has always thought Manny was sexy as hell, but he was way too young, and just happened to be one of his closest friends’ son. However, when Manny is rescued, Frankie can’t help but notice the change in the young man.

When the two discover they are mates, Manny and Frankie must work together with their friends to find answers, before the Phoenix Rising gets Manny killed.

Review: Each book in the Eternal Flames collection features a new romantic couple. To enjoy the overall story arc and crossover characters, I would recommend reading the series in sequential order.

It has been sometime since I had read the previous books in this series but it was like I never forgot them. I remember Manny and his mother. I remember when his mother had been killed and how hard it had been on the boy. He had been taken in and adopted by two wonderful men who adored him. Now he is almost twenty one years old, boy time sure does fly by. Walking home he is abducted by a green man, and everyone knows green men are dangerous as hell. However many surprises are in store for Manny, and only that green man can help him. To top it off the one man he had a crush on, just so happens to be the one man he needs the most.

Frankie has always liked Manny, even when he was just a kid. Which makes him freak out a bit, however Manny’s scent has changed and damn if he isn’t his mate. To top it off, Manny skin tone is changing, and that change just might mean a little twist.

I absolutely loved Manny and Frankie. They just seemed to rock it perfectly. Many would say that Manny is too immature and his father is too protective, but once you figure out their story you can see how it just pulled the story together. For one Manny is still very young and his fathers are his adopted fathers. So when something kind of shows up and your young man is growing, the empty nest feeling does start to happen. I actually felt for them all during that time.

It has a serious tone to it, but there is some humor that mixes just right for this story. It caught my attention from the start and kept it all the way to the end. I got a kick out of it and can’t wait to start in on the next book.