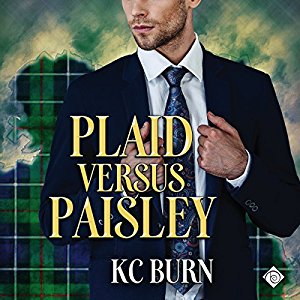 But Dallas doesn’t realize how deep Will’s distrust runs, and Will doesn’t know that the man he’s torn between loving and hating is the boss’ brother. When all truths are revealed, how can a relationship built on lies still stand?

Review: Plaid Versus Paisley is the second book in KC Burn’s series Fabric Hearts. I recommend that you start with book 1 in the series, Tartan Candy if you already haven’t. This is a quirky little world that Burns has created and to do it justice you definitely should start from the beginning. Honestly, with a series title called Fabric Hearts I expect to enter the world of a happy little sewing circle, not a bunch of guys who have a penchant for certain fabrics but working for a gay porn website. That was probably a crass summary but I stand by it.

The story is about Will Dawson and Dallas Greene.

Dallas had always looked up to Will and is confused as to why Will obviously hates him and refuses to allow Dallas to do his job. Dallas went to Florida where his half-brother Stefan runs Idyll Fling. Dallas has been through hell – including illness and rejection from his family. He had never really fit into his privileged family and when everything falls apart all he can do is pray that his half-brother will be willing to help. It is a totally heartbreaking part and I love Stefan for stepping up to the plate. I don’t know what one would expect as the stereotype of a guy who runs a porn website, but Stefan is just the biggest sweetheart. I liked him in Tartan Candy but in Plaid Versus Paisley he is hands down the best secondary character in the series.

There is a lot going on beneath the surface with Will and Dallas. Will is obnoxious at first and full of hate, while Dallas is broken and nervous, waiting for something to happen in a second. He is also paranoid as fuck and there were a couple times I wished I could slap him. These guys have a rocky journey, but it is all worth it. On top of that, there is also a heck of a lot of sexual tension and steamy sex.

The narrator of this series is David Ross. I’ve not heard many books he narrates, I think Tartan Candy was the first I heard, I enjoyed the tone and voice he gave the characters. I was especially able to connect to sadness surrounding Dallas.