Hi guys! We have Katey Hawthorne popping in today with her new release Poor Little Rich Boy, we have a brilliant short guest post from Katey, a great excerpt and a fantastic 2 x £10 Amazon GC giveaway, so check out the post and enter the giveaway! ❤️ ~Pixie~ 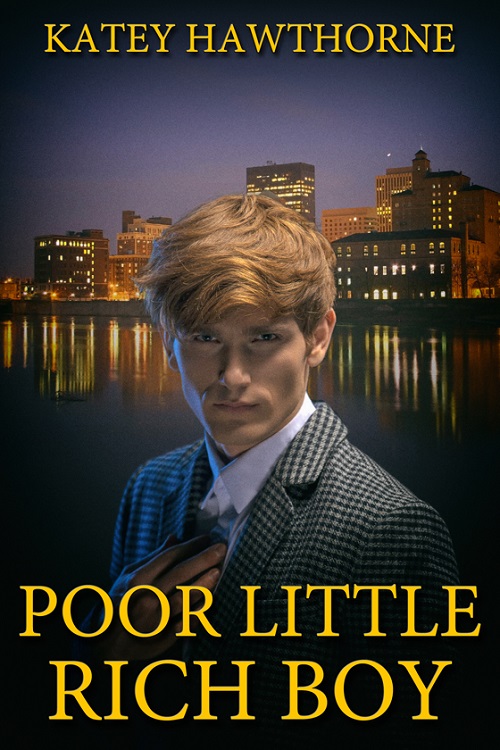 Ted MacTaggart’s overbearing father is still trying to control his life, even from the grave. His will insists that, in order to inherit the family company, MAC Superior, Ted must be married by his twenty-fifth birthday — and the marriage has to be “real.” As in the board of MAC has to sign off on it.

Ted could fight the will, but then the handsome, artistic Ryan Costa, an old friend from school days walks back into his life, offering to be his groom-of-convenience. Ted draws up the contracts and Ryan, who has family medical bill problems, agrees gladly to the terms. Ted, emotionally walled off and afraid of his attraction to Ryan, also suggests they should keep their relationship strictly professional. Caring for people has always proven a weakness for him. Now isn’t the time to start.

It’s not long before Ryan’s charm breaks through Ted’s walls, but Ted isn’t his own worst enemy in this case. Other forces are vying for MAC Superior, and even when their relationship is becoming the real deal, its shaky foundations land Ryan and Ted in trouble.

Thank you so much for having me at MM Good Book Reviews! Today I’m celebrating the release of my new fluffy, contemporary romance, Poor Little Rich Boy from JMS Books. It takes place in the town where I currently live and have come to love, Dayton, Ohio. I know, not what you think of when you think millionaire romance, but I like to think that’s part of the charm. In it, the hero (and millionaire), Ted, has to arrange a marriage of convenience for himself. He means to keep his fake-husband Ryan at arms length for simplicity’s sake, but the best-laid plans of mice and men, as they say, are often complicated by inconvenient if true love.

Ted and Ryan fake-honeymoon in Provence, one of my favorite places in the world, so I thought I’d do a little visual tour for y’all, just so it’s clear how difficult it would be NOT to fall in love there. If you weren’t already in love, that is. Click for the full-size effect!

A recipe for a Fake Honeymoon in Provence… 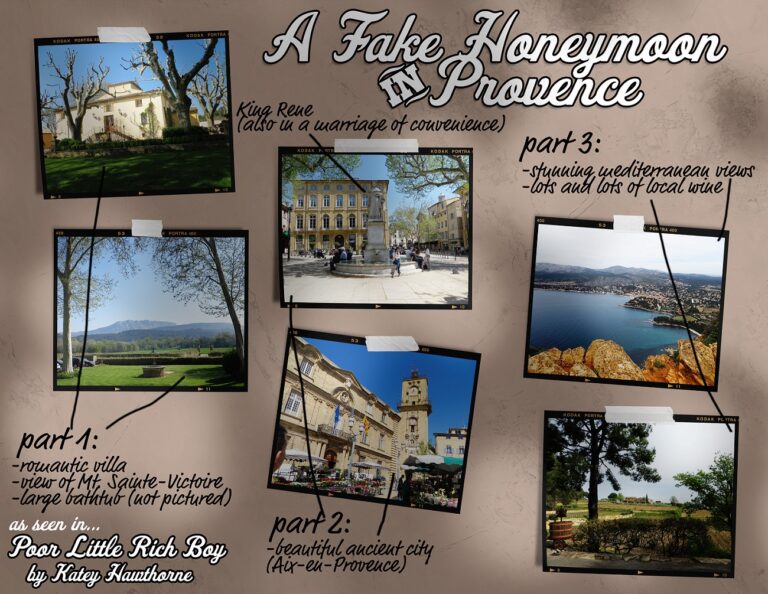 (Aix-en-Provence, in this case)

(Includes a picture of King Rene’s fountain. He was also in a marriage of convenience.)

-lots and lots of local wine

To come along with Ted and Ryan on their romantic, super fake honeymoon, check out Poor Little Rich Boy, out now from JMS Books! 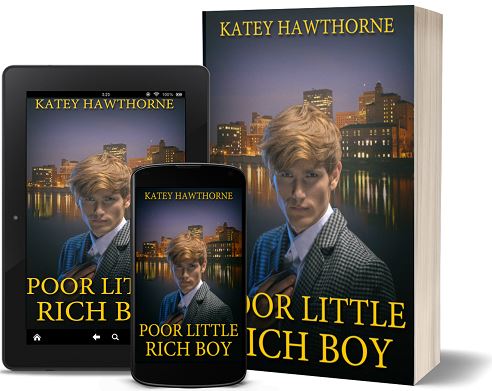 Ted elbowed Ryan hard to direct his attention to Mrs. Schein. “From her. And her daughters.”

“Oh shit. Let’s go!” Ryan grabbed his hand and ducked into the crowd, heading for what looked like an employees-only area down a set of stairs. “Where are we hiding?”

“You could just marry one of –“

“I will punch you in the throat if you say one more word of that sentence.”

Ryan cackled gleefully as he pulled Ted along. Finally, just when they seemed to have lost the Schein women in the crush of arrivals, Ryan discovered a door. He pulled on it and they both jumped in, then closed the door after.

It was, naturally, an employee coat closet stuffed nearly to the brim and dark as pitch.

“Who was she?” Ryan whispered, rustling amongst the coats.

“Arabella Schein. The family owns that bottle company. You know, for the babies?

“Don’t get me started.” Ted had to move, too, since a coat hanger was sticking into his ear. He took half a step forward and nearly trod on Ryan’s toe. “Sorry.”

Ryan laughed. More of a giggle, really, for a grown man.

Ted, for some reason, laughed too. He hushed them both quickly, “Shh, she might still be looking for me!”

“So what if she finds us?” Ryan’s hand settled on Ted’s hip.

Ryan leaned closer, his breath like whisky from their earlier shots, hot on Ted’s ear. “She’ll just think we hid in here to make out. Adds credence to the whole engagement thing. It has to look real, right?”

Ted’s throat constricted, but he managed to squeeze out. “I suppose.”

Ryan’s other hand gripped Ted’s lapel. Ryan said, “Sorry, trying to find you so I don’t step on you.”

Ted cleared his throat, but it still felt tight. A sudden sense of panic that had nothing to do with claustrophobia seized his insides. “I can’t believe I’m hiding like a child …”

“I can.” Ryan laughed again, puffs of air against Ted’s cheek. “She looked intense.”

Ted wanted to lean away. To step back, hanger in his ear be damned. But he couldn’t. He was frozen in place, Ryan holding them both up, barely four inches from him. In that goddamn tux. Ted’s voice was rough when he said, “Word must’ve gotten out I’m likely to end up with the business, at least.”

“What, society matrons don’t normally magnetize to you in public?”

Ted almost laughed. “Actually, yes, all the time. They seem to think my rampant homosexuality is just a way of accessorizing.”

Ted ached to reach for him. Just a few inches, and he could feel Ryan’s hard, warm body with his fingertips. Run his hands up underneath that waistcoat. Explore places he’d only imagined, both as a teenager and now, as a grown-ass man, hiding in a goddamn coat closet.

It was too much. Ted shivered.

“C’mere.” Ryan leaned closer still, so their fronts barely touched. His heartbeat just a few thin layers of material from Ted’s chest. He pressed their cheeks together.

It would be painfully obvious at that point that far from being cold, Ted was flushed with heat from his toes to the tips of his ears. When Ryan slid an arm around his waist, Ted let out an involuntary strangled sound. He tried to cover it by clearing his throat.

Ryan swayed a little against him, as if they were dancing, shifting his weight from foot-to-foot. He hummed. “You always smell nice.”

Ted wondered what he was fighting for. Ryan was five seconds from going down on him in this closet, and here he was, gagging for it but telling himself no. He had reasons, he was sure, but his mind was losing necessary processing power as his cock flushed with blood like the greedy bastard it was.

Panic welled in him again, black but hot around the edges like burning coals. Touch was too unfamiliar; it beckoned and beguiled and terrified. It was too much and there was no time or place to process, here. He had to get out. “She’s probably gone,” he said.

Ryan backed off, unwinding his arm from around Ted slowly. He mumbled something that sounded painfully like, “Shame.”

Ted pushed open the door, allowing light and revelry to flood their dark moment. He adjusted his trousers before stepping out and starting up the stairs. He couldn’t help but notice that Ryan did too. 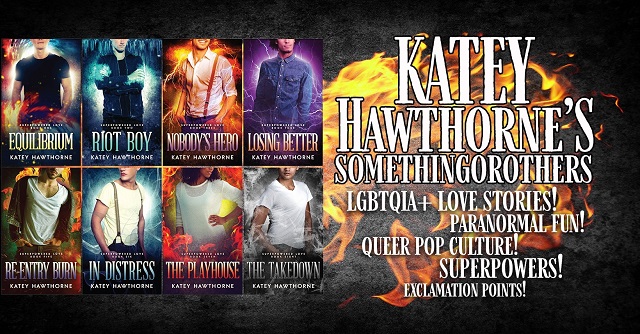 Hawthorne loves queer romance. Originally from the Appalachian foothills of West Virginia, she currently lives in Ohio with her family, two cats, and two huge puppies. In her spare time, she enjoys travel, comic books, B-movies, loud music, video games, Epiphones, and Bushmills. Her favorite causes include animal rescue and bisexual representation in media. She is an unashamed fangirl and collects nerdy tattoos like she’s trying to prove it.