Hi guys, we have A.E. Via visiting today with her audio release Promises: Part 1, we have a great excerpt, so check out the post and then enjoy! ❤️ ~Pixie~ p.s. keep an eye out for Prime’s review coming soon! 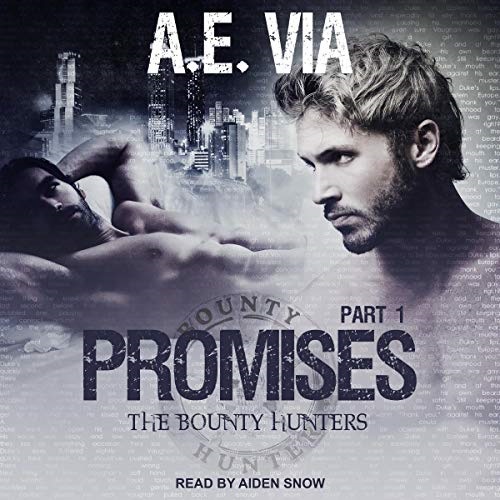 Duke tried to pry himself from his nightmare, his chest heaving because in his dream he’d been running for his life. Why did he keep having the same damn dream over and over? Who was he running from? Then everything went still and tranquil. A large warm hand was caressing him from his throat down to his navel, so patient and careful. The sweetest, gentlest touch he’d ever felt. Like he was being cherished. He needed to open his eyes all the way, but what if he was still dreaming. Finally, he was completely free of the dream, breathing normally; he didn’t want to wake and ruin it.

“Easy, sweetheart. It was just a dream,” a sensual voice said next to his throat.

Duke wanted to bury himself under Vaughan’s delicious morning growl and stay there until he was forced away. It comforted him like nothing ever had. Waking up drenched in sweat, his voice hoarse from yelling out had been a frequent occurrence in recent weeks; starting right before he left the hospital. He was afraid that he may have to take Charlie’s advice. The old man had run into Duke’s bedroom one too many times looking as frightened as Duke felt before he reluctantly insisted Charlie go home. Nightmares had never killed anyone. He’d figure it out on his own.

Duke was wide-awake, but he kept his eyes closed, wanting to soak up every moment of comfort, every inch of contact that Vaughan was giving him. He was so close; Duke could feel the warmth wisping over his sensitive neck with each word he spoke. He moaned slightly when Vaughan stroked his chest, not bothered by the sweat that clung to him. “I’m fine.”

“I know you are,” Vaughan quipped back. “But I didn’t ask how you were.”

“I have them almost nightly, but at least they’re not getting worse. I don’t think I was yelling.” Oh no, was I?

“No. You weren’t yelling but you were breathing hard and grunting.”