Hi guys, we have A.E. Via visiting today with her audio release Promises: Part 3, we have a great excerpt and a brilliant 4x $25 Amazon GC giveaway, so check out the post and then enter the giveaway! ❤️ ~Pixie~ p.s. keep an eye out for Prime’s review coming soon! 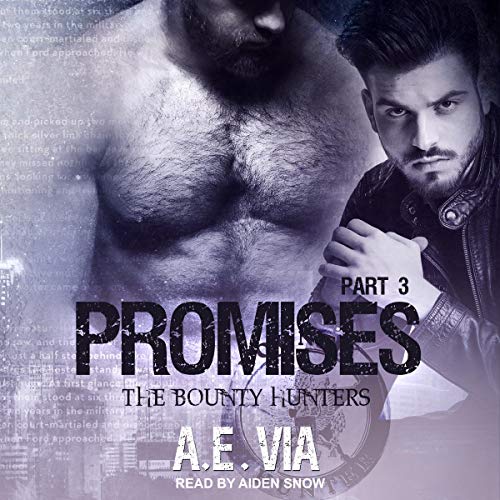 The hunt is on… and he’s the prey.

Bradford (Ford) King was sure he had the rest of his life mapped out. Though he was no longer a SEAL Lieutenant, his brother was home safe and he had a job that still allowed him to satisfy his hunger for hunting bad guys. Life was simple, no distractions or complications – at age forty-six – that’s all Ford wanted. What he didn’t want was his work partner, sniper/watchman, Dana, giving him s**t all the time.

Dana Cadby had grown up labeled a roughneck from the wrong side of the tracks. He’d fought, scrounged, and survived despite a father that constantly told him he couldn’t. Dana pulled himself up by his own boot straps and made a name for himself in the marksman community. He’d been Duke’s bounty watchman for five years. It was his job to ensure their safety, watch their backs. At thirty-three, he was trusted, well respected by his peers, his bosses, his friends… so why couldn’t he earn the same respect from his partner?

Dana knew he was bisexual before he graduated high school. He also knew he was attracted to the huge, 6’3”, SEAL from the moment he and his brother came to join their team. It wasn’t easy for him to tamp down his immediate reaction to Ford’s thick muscles, full beard, and dark eyes. Still, Dana exhibited nothing but professionalism towards him, not wanting to make his ‘straight’ partner uncomfortable.

After Dana took back his ex-girlfriend, he’d noticed an intensification in Ford’s bad attitude. One that turned aggressive and downright antagonistic, and Dana was damned if he’d just lay down and take it. He was gonna make that man respect him if it was the last thing he did.

When Duke sends Dana and Ford out to track down their most dangerous bounty yet, they both embrace the fact that they make one hell of a team… but they fight tooth and nail against the powerful intimacy brewing between them.

Beware: When Ford and Dana connect, no fugitive can hide from the hunter and his watchman.

This story is a part of a series but can stand alone. It does not end on a cliffhanger and has a HEA.

Disclaimer: This book is about MM romance, albeit there is a very brief MF scene. “Grin all you want, you cocky little shit, but I’ll show you what this old man can do when I get you on that mat.” Ford ripped his arms away and walked up the row, turning the corner without a backwards glance.

Dana pulled in a breath of air and ran his hand over his chest where Ford’s arm had been. He felt hot and mildly embarrassed. He thought he’d played it off well, though. He should’ve known Ford wouldn’t take the joke for what it was. The man had no sense of humor… when it came to him, anyway. Dana had seen Ford laugh with his brother and smile when he was going over the latest military gadget he was able to get on the underground web, but lately the man refused to humor him. Dana dropped down on the small bench between the lockers. His big mouth had just written a check that his body was going to have to cash. Ford would be more than happy to teach his thirty-three-year-old ass a lesson in respecting his elders.

“Your bounty will not expect you to wrestle with him. Getting him on the ground is the best way to subdue him. Rush him, catch him off guard.” Quick walked back and forth across the mat, his muscular arms clasped behind his back while he instructed. Quick was an eighth degree black belt. He’d been studying martial arts since he was a boy. Hell, even Ford and Brian together couldn’t take him down. He was fast and a master at counter-maneuvers. You had to be able to get your hands on him first to do anything to him, and that was pretty much impossible. So Dana could respect Quick as a teacher. “Don’t second guess yourself. There’s no time for that. If you have an opportunity, take it. Got it?”

Everyone nodded their understanding. Duke stepped up. His black and gray hair was thick and disordered. He looked confident as always, but his eyes couldn’t hide his concern. “I called the extra training session this month because I’ve been contracted to go after a couple pretty big fish. These two brothers – Raymond and John Grossman – are well-known meth dealers here in Atlanta. They were bonded out on a five hundred thousand-dollar bond each but failed to appear a month ago. These men are dangerous. They have security, armed guards. They have money and lots of contacts, meaning plenty of places to hide. We’re going to have extensive hours of surveillance and scouting ahead of us. We’re going to finish training here then reconvene at the office for a strategy meeting later today. We gotta bring our A-game, like always. We were brought on because we know how to do this shit, so let’s get ready.” Duke looked back at his business partner. “Alright, Quick. Let’s get started.”

Ford moved back, letting him catch his breath. Dana was panting and sweating all over the place. They’d moved on from counter attacks to take-downs and submissions. Quick was giving them pointers while he demonstrated on the other martial arts instructor employed by the gym. Ford kept dumping Dana on his back every time he came at him. Although Ford never cracked a smile, it still looked like he enjoyed seeing Dana down there in pain, his face a mask of frustration as he tried to gain the upper hand.

“Dana, stop letting him get his arms around your thighs, goddamnit! You’re overthinking it!” Quick barked.

“Pair me with Duke or something. How the hell am I going to take Ford’s big ass down?” Dana fussed back, slowly getting back up on one knee.

“Are you saying you can only take down smaller men? If you are, then you are useless to me.” Quick was in Dana’s face, his forehead bumping into him while he pushed him back. “What’s size have to do with skill? You’ve seen me take down Brian and Ford. Both of them are bigger than me. You’ve seen Duke take down men twice his size. Defeating your opponent only takes skill and confidence, Dana, and you’ve got both of those in spades, so use them. Now get your ass back in position and stop bitching or I’ll have you riding a goddamn desk while the real men do the work.”

When Dana got back in front of Ford, the bastard couldn’t resist returning the wink Dana had given him in the locker room. “Now you be sure to take it easy on this old man.”

“No. I’ll leave that to your prima donna girlfriend.”

Dana stood up, wondering what the hell business that was of Ford’s. “Jealous?”

Ford grunted an angry breath. “Of what? Being a fool just to get some bougie ass from a stuck-up bitch?”

Dana rushed at Ford like an idiot, shoving his shoulder into his midsection, trying to take him down. Ford folded his heavy body over Dana’s back and dropped all his weight, slamming him down face first to the mat. The air rushed out of him and he struggled to breathe with the massive man pinning him down. Ford’s reverse bear-hug had Dana’s arms wrapped so tight, he felt like he was in the grip of an anaconda. The crazy part was, Dana didn’t hear or see anyone coming to his aid. Obviously, this wasn’t a technique they were learning.

Ford’s mouth was by his ear, his hot breath fanning over his heated skin. “Pretty shitty sneak attack, boy.”

“Boy?” Dana hissed, his face flat to the mat. “Why are you always talking shit about her, huh?”

Ford’s hold around his entire upper body kept him from being able to do anything but snarl his frustrated words. “Why, Ford? You’ve been an ass ever since I got back with her.” Dana struggled, getting more pissed off by the second. “Answer me. Why don’t you want me with her?”

“Because you deserve better than that,” Ford said too quietly for the other guys to hear, and let Dana go.