Hi guys! We have Adria August popping in today with blast from the past Psychic Men, we have a great excerpt and a brilliant giveaway so check out the post and enter the giveaway! ❤️ ~Pixie~ 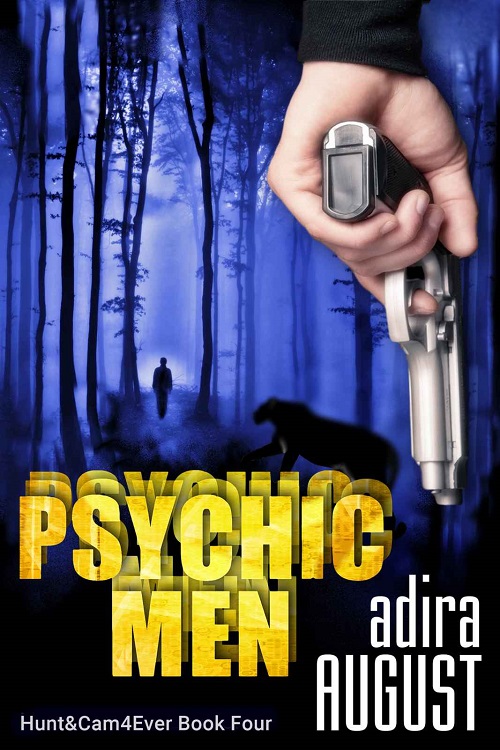 Knowing what’s coming doesn’t mean you can stop it.

Life’s become routine for Hunt and Cam—solving murders, hanging at the club and expressing their affection for one another. Vigorously. Then a skinny kid barely into his teens sought them out.

“I saw my father last night,” Asher Gamble told Hunter. “He said Jason Furney’s going to die and people will say I did it.”

Hunt frowned. The boy’s name seemed familiar. “Tell me the rest of it.”

Asher locked his gaze on Hunt’s as intractably as Cam ever had.

“My father killed my mother and my brother when I was two years old. He died in prison four years ago.”

So much for routine.

A 60k word police procedural designed to be read stand-lone. The 4th book in the Hunt&Cam4Ever series which begins with Matchstick Men. For adult lovers of murder mysteries and apple pie for breakfast.

Psychic Men is fact-based like the other Hunter Dane Investigations in the Hunt&Cam4Ever series which starts with Matchstick Men. I’ve used my artistic license to sculpt real things into a story I made up. The murder is fiction. The psychism is not. Se Appendix for links. “I HAD A CALL WHILE you were running,” Cam settled on a counter stool while Hunter cleaned up after breakfast. “You know David Morganfeld?”

“The classical pianist? Not personally, but yeah, he lives in the glass and metal monstrosity a couple miles along the track,” Hunter said, bringing a jar of salve with him and taking the stool next to Cam’s. “You taking off your pants, or am I doing it?” He ran a finger over the bulge of Cam’s cock under the fabric. “And how would you like me to do it?”

Every morning that Hunt stayed at Cam’s, which was most nights, he put a healing ointment on Cam’s left thigh. The salve treated the scars left by bullets and surgery and the external fixators that had been screwed into his shattered femur.

Even after four months, it was rare that they got through the process without orgasms. At first, the feeling of Hunt’s fingers on the scars had been unpleasant. Not painful, according to Cam, but weirdly nauseating. But it had to be done, to keep the scars from hardening, and over time, to fade.

They’d been on the massage table in Cam’s birch-paneled bathroom that first time. So Hunter had used the most expedient distraction available: he’d taken Cam’s limp dick into his mouth. It didn’t stay soft for long. Hunter’s tongue and lips worked his Dom’s cock while his fingers worked the salve over the scars.

Cam had lain back, not chasing his orgasm until Hunter treated the last of the scars and wrapped his strong arms around Cam’s hips, pulling him tight to himself, deep-throating him.

It had become their morning ritual, and they were quite creative about varying the location and form of sex play. The scars had smoothed and flattened without hardening, and the feeling of Hunt’s fingers no longer bothered Cam. But it was still, they agreed, a fine way to start their day. I don’t write the fantasy HEA. But there are such things as commitments kept, caring unreservedly for another, and never giving up. Which means everything is a love story. Murder investigations included.

My characters and their stories are everything. Hunt and Cam, Ben and Avia, Mike and Cal are vibrant, passionate people. So there tends to be a lot of sex. And they are as real to me as my readers are. CLICK HERE FOR YOUR CHANCE TO WIN A $5 GIFT CARD