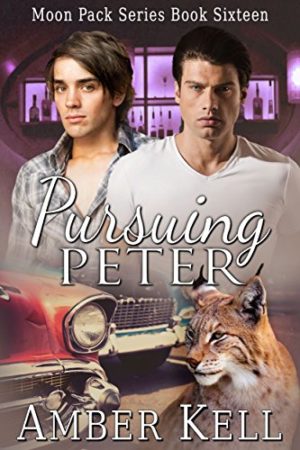 Blurb: Peter Woods had never expected to find a soulmate. After his time spent as a mutant, turning into a wolf had become a painful transformation.

Quain Ilves planned on spending his life alone. As a seer he had no vision of a future partner especially after wizards captured and tortured him.

Two lost souls found each other through the interfering hand of fate. Now it was up to them to grab onto their happy ending and not let wizards, parents or outside forces pull them apart.

Review: So much happens in this exciting addition of the moon pack series. Quinn is a seer and despairs of ever escaping his captors who have tortured him for his his visions when one day he sees a man named Peter, who is a wolf and his mate. Peter promises to save him and a days later the vision comes true. But Quinn has a bracelet on that prevents him from shifting so Peter takes him to Anthony to remove it.

Quinn in return becomes Anthony’s seer. Peter wants to be happy but his past is haunting him. He can not get over what happened to him and his pack at the hands of the scientists. I loved this story as it combined two couples. I loved Peter and Quinn while at the same time I was sad for all they had been through.

Anthony and Silver was a nice set up for another book. I was intrigued by the events taking place and eagerly awaiting the next book.