Hi guys! We have B.A. Tortuga stopping by today with her upcoming release Rainbow Rodeo, we have a brilliant guest post from B.A. and a great excerpt, so check out the post and enjoy! ❤ ~Pixie~ 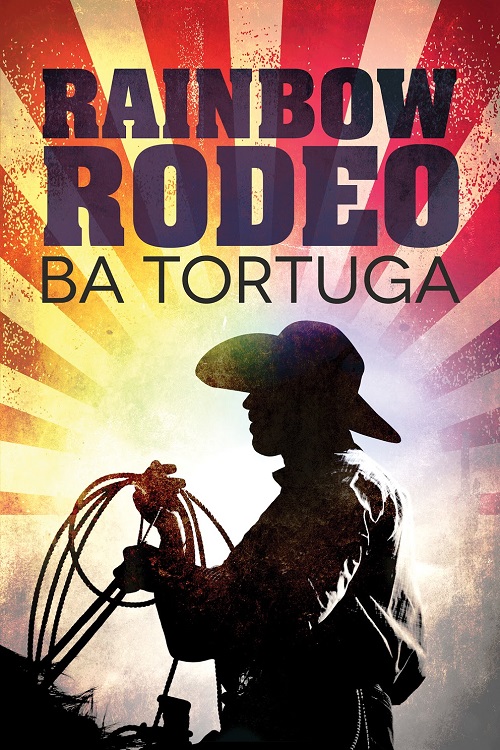 As a teenager, Dalton Jakoby made Tank an offer—one Tank turned down gently. It was still embarrassing as hell, so when Tank returns to the Jakoby Rodeo Company after a big-time bull riding tour, Dalton decides polite but distant is the best course of action.

Tank is hurting from some tough injuries and ready for a lighter workload. He’s also ready to admit Dalton is an adult now, one he wants to get to know much better. While Dalton’s past makes him suspicious of Tank’s attention, he can’t stay standoffish for long… not with Tank.

The new romance burns hot, but problems inside and outside the arena threaten what Tank and Dalton might have together.

So, why Rainbow Rodeo.

Well, I have to admit that I’m one hell of a rodeo fan, and I was jabbering with Andrew Grey years ago about an idea that I had about rodeo and how hard the life had to be, if you had to stay in the closet (although there’s an old joke about straight cowboys and a six-pack that never ceases to make me laugh…). As we chatted, I came up with a gay-friendly rodeo – one that didn’t take any bull, one that didn’t allow nonsense.

A rodeo family where all people were welcome.

I’m so excited to introduce you to Dalton Jakoby – one of the Jakoby kids that is the face of the Jakoby Rodeo Company – and Tank Martin, bullfighter extraordinaire along with all the other people that make the rodeo go.

There’s danger, romance, rodeoing, and some smoking hot sex – something for everyone! “DON’T MAKE me hurt you, man.” Dalton Jakoby looked at Ben, shaking his head at his oldest buddy and possibly the dumbest bull rider in the history of rodeo—and no one ever said these guys were rocket scientists. “You keep landing on your head, eventually you’re going to have your brains leaking out of your ears.”

Ben nodded, then winced. “I don’t think I broke anything.”

“Good. I guess. You want a beer, man?” The arena was dark now, the local Wyoming cowboys gone home and a goodly amount of the ones left headed to the biker bar out on the highway.

The rest of them were fixin’ to break up into groups and do their things—poker, dancing, beer, shit. There was even a little projector with some Disney movie playing on the side of a trailer.

“Dr Pepper?” Tony asked, the bullfighter appearing out of the gloom.

“He was back in sports medicine. He’s on his way now. Lanny James is headed out to the ER.” Tony rolled his eyes, but Dalton saw the worry in the bullfighter’s face.

“Damn. That sucks. Someone call his momma?”

“Yeah.” Dalton’s twin was totally the good one. It was crazy-making. Dustin was always the one to crack when Momma and Daddy put the pressure on them, not him.

Tony dug into a cooler to hand Ben a soda. “Beer, Dalton?”

“Please. I’m off the clock.” Off the clock until he had to meet with the newspaper lady for an interview at ten tomorrow morning.

“You and me both.” Tony winked at him, dark eyes dancing.

“Praise God for that.” If Ben was getting himself hurt on Friday night, that meant the weekend was going to be rough. He felt it on the air.

“Yessir.” Tony tossed over a beer, and they headed to the stack of chairs the guys had put out. Best part about being a Jakoby was that most of the time, someone had dealt with the little shit. Worst part was all the big shit left to handle, he reckoned.

They settled in across from the others, Ben leaning his head back, a couple of the gate pullers from the local sheriff’s posse joining them. “Y’all mind if we join you?”

“Come on. We don’t sit on ceremony.” It was still a little weird to Dalton, saying that. Usually it was Pops, and not all that terrible long ago it had been Granddaddy, to welcome folks in.

A warm hand landed on his shoulder, and he didn’t even have to look. “All locked down for the night, Bubba.”

Dalton handed his beer up to Dustin, and Tony tossed him another.

Dustin came around to plop down next to him. “Damn, it’s gonna be a long weekend.”

Greg gave them both a hard look, proving that the second of their bullfighters was feeling his oats, maybe feeling his cups some. “Don’t borrow trouble, boys.”

They looked at each other, both barely keeping from rolling their eyes. Wasn’t any borrowing to it. It was what it was.

“Damn, that was a long night.” Gene Major, one of the stockmen, joined them, cracking his neck like a shot.

“And it’s just Friday.” Dalton and Dustin spoke in unison.

“Yeah. Shit, man.” Gene grabbed a Coke. He didn’t drink since his wife left him.

“Stop it, y’all. You’re begging trouble.” Tony was getting growly.

“Yeah, yeah.” They all grinned at one another, leaning back and enjoying the spring evening. It was damn near chilly, when you got right down to it. It wouldn’t be like this back home still. It would be nice and not too terrible hot, but chilly? Not hardly.

“We ought to pull out the cards, huh? I got some quarters and pennies in a jar.” Ben did love his penny-ante poker on a Friday night.

“You sure you can remember what all the cards are?” Dalton teased. “You rang your bell but good.”

“Fuck off, man. You still owe me five bucks from our last round.”

He snorted and nodded. “True that. We can play some cards.”

The circle of trailers was starting to warm up—different grills and lights coming on, music playing from all directions. It was a little like a cowboy caravan, with everything from POS trailers with cots to Airstreams to eighty-thousand-dollar homes on wheels. There was room for all of them—from holey boots to 1000X Stetsons. Dalton had grown up surrounded by this, and now it was theirs, theirs to love, to protect, to—

“Fucking dyke!” The snarl was followed by the sound of flesh hitting flesh, and Dalton was up and moving before the echo faded.

“Let go of me, you asshole!” Cheri Stevens stumbled into his path, clutching at her right arm with her left hand.

“Cheri? Baby? I heard you yell….” Cheri’s wife, Missy, was heading toward them like a large blonde freight train.

“Fucking dick tease.” A lanky bronc rider, who was new to the tour, staggered out of the shadows behind Cheri.

“Sure I do, lady. Breathe.” He turned on the cowboy who’d left marks on Cheri. “Back off, cowboy. You head on out of here.”

“You cunt. You ever fucked a real man, you’d turn normal.”

Dalton looked at the guy for half a second. Maybe two-thirds of one. Then he swung. No monologuing. Just bam. One to the breadbasket, right to the jaw, uppercut to the chin.

No one fucked with his people.

The guy stumbled back, like his bones had forgotten how to work, and then he surged up, whiskey and bravado making the son of a bitch stupid. His breath liked to knock Dalton down, but the wild punch the guy threw didn’t even graze him.

The day he couldn’t wipe the floor with a drunken cowboy was the day they could hang up his spurs.

Dalton ducked, then bopped the asshole on the nose.

“You’ll just piss him off like that, Dee,” Dustin pointed out.

“Makes it more fun, though,” Ben added. “His buddies are coming.”

“Oh good. We’ll clean house all at once.”

Ben grinned and nodded, lining up next to Dalton and Dustin. Oh, this was more fun than color TV. “You sure you want to get into this, boys? We’re loaded for bear.”

One of the first asshole’s buddies took a shot at Dustin and went down. He didn’t get back up.

The sound of his pops’s boot steps on the dirt were more familiar than anything but Dustin’s heartbeat. “What’s going on here?”

“Mr. Jakoby! Thank God.” One of the riders stepped forward, hat in hand. “Your sons are beatin’ on my friends.”

“The man in question grabbed ahold of Cheri, cussed her, and questioned her honor, Pops.”

His dad turned on the cowboys, glaring. “Did you, now? Well, boys, we don’t hold with that shit here.”

Dalton thought that if he hit the bastard again, it might clear up the slurring….

It was the elder Jakoby who stepped up to the plate this time, grabbing the kid by the front of the shirt. “This rodeo company is friendly to everyone but assholes, boy.”

It was good to be a gay man with a rodeo company where Granddaddy had a gay son, and his daddy had three out of five. Granddaddy didn’t hold with any hate—whether it be religion or race or who you fucked.

“You ever notice how they all reduce down to obscenities?” Dustin drawled.

“Yup.” Ben cracked his knuckles. “Was there beer?”

“There is.” Dalton didn’t bother to look over; Ben and Dustin had his back. “You want me to make sure they go, Pops?”

“You and Dustin. No one goes alone until we know they’re out.” Pops turned to Cheri. “You okay, girl?”

“Well, someone get the lady some ice.”

Dustin grinned at him, nodding toward the parking area. “Come on, Dee.”

“Lead on, MacDuff.” He didn’t worry. Between Ben and the bullfighters, they were covered. No one would attack them all.

“That was pure poetry, by the way. Those punches.”

He managed a decent bow as he walked. “Thank you, thank you very much.”

Dustin clapped him on the back when he straightened. “Ben was looking good too, for all that he lands on his head all the time. I’m surprised Tony didn’t wade in.”

“Yeah.” That man had been grumpy, sure as shit. “Tony’s not bad for a bullfighter.”

The voice was as familiar and unwelcome as any he’d heard in damn near eight years.