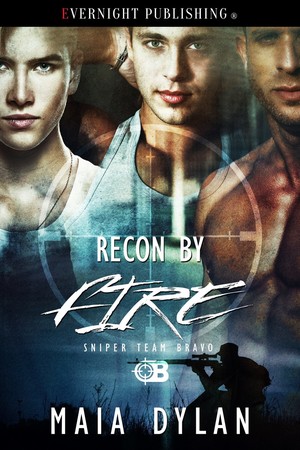 Blurb: A sniper will employ a recon by fire technique when the position of their enemy is unknown. It can also be a tactic for two men looking to convince the man they both want for their future to take a chance on them.

Nick Jones and Aiden George are committed to each other. When they meet a marine medic who ignites a passion within both of them, they’re determined that he’s the third they never knew they were looking for.

Sam Wilson is plagued by doubts instilled within him at a young age. When he gives in to one night of passion with two servicemen he meets during an attack on the base, those doubts make him run. When he meets them again eighteen months later, the three must overcome Sam’s past, defeat an unknown enemy, and pursue the future Aiden and Nick are convinced they can all achieve together.

Will they be able to find their target in time, or will the fire of their love be left to burn out completely?

Review: Each book in the Sniper Team Bravo collection features a new romantic couple. To enjoy the overall story arc and crossover characters, I would recommend reading the series in sequential order.

I came across Maia when the first book in this series came out and I have to say that she does have an amazing gift at telling a story.  I always did love a good man in a uniform who is sexy, loyal and damn good with a gun.  I also liked the fact that in the blurb she explains a bit about what the title itself means.

It is not only an entertaining tale, but is full of action, hot sex and danger.  There is just a hint of humor in it that makes it even better.  Usually it is when Sam gets called Pretty Boy, thanks to Finn but damn it is funny all the same.  Nicknames do stick with you sometimes.  What is better then two men, lets say three is hotter.

Nick and Aiden have been together for quite some time.  They knew there was something they were missing and in a war zone they found it.  Too bad it had sent the man running for the hills.  Now out of the field, they are living in a nice town, that just happens to be where Sam is.  The same Sam that ran from them.  They just needed to show him, that they wanted him for life.

Sam has always grown up as a second filler, never wanted but needed.  He had been born just to save his older brother, and when his brother died, his parents pretty much abandoned him.  To him he will never be wanted just for himself.  Now here are two men who are together, and his trust is at test.  To top it off, danger seems to keep coming for them all.

A very intriguing story that was quite a bit of fun to read.  I had to actually go back and read the whole series over once more.  I loved the characters and the way they are with each other.  They might be a sniper team but they were also a tight family.  I loved that about them and was glad that the author turned it that way.  I would definitely recommend this book.