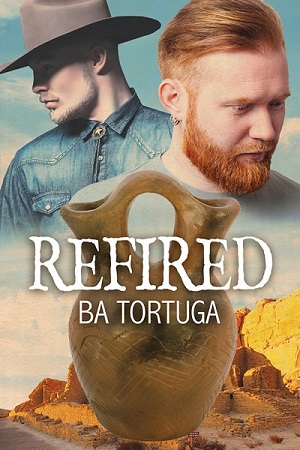 Blurb: When Kris Cerny walks back into Two Spirits, the art gallery he owns with Josh McPhee, all he wants is a clean break. Austin’s booming real estate market means the building he bought years ago is worth a fortune, and with the sale, he and Josh can finally go their separate ways. They won’t be reconciling, right? Josh may be sober now, but an addict is always going to be an addict, and Kris can’t take that chance again.

Josh isn’t willing to sell. Not yet. He’s discovered a new artist in Santa Fe he knows will put Two Spirits in the black, and if he can just make a success of the gallery, maybe he can earn Kris’s respect, if not recapture his love. He need Kris to give him time for one more buying trip, one more gallery show. Josh wants nothing more than a final chance to make things right. Kris agrees to let Josh have this last ditch effort on one condition– he wants to go along for the ride. On the way Josh hopes they’ll find the next big thing in the art world as well as peace, forgiveness, and a love he thought was lost forever.

Review: Kris and Josh had been together for quite sometimes, but not all of it was good. Kris had wanted Josh to stop drinking but at the time Josh had not been ready. Now five years later, Josh had earned his five year sober pin. Yet it wasn’t enough for Kris. He didn’t trust Josh and it showed. Now someone was offering quite a bit of money for the building they owned, and Kris wanted to go for it. To bad for him Josh didn’t.

Josh didn’t want to let Kris go. He knew that no matter what he did it would never be good enough for the man. However he has found a new artist and he was going to go check him out. Buisness is good but the heart is not. So you can imagine Josh’s reaction when Kris tells him he is going to go along.

This was one long drawn out story. I am not even sure what to rate it and hell if I even like it or not. It was a bit on the dull side and almost put me to sleep. It was one man going on about his partner being a drunk, while at the same time he is on the wagon. Yet neither man had had a drink in some time, but it doesn’t seem to matter to him. They have a past that just doesn’t seem to matter, then turn around and in the end they are together. It just doesn’t work for me. Also the prologue was a bit strange and I didn’t catch on till the end of the story. A clay wedding vase meant for true love.

I could not connect with either character and lets face it Kris was an ass. There didn’t seem to be any heat or passion from either guy, but a few times of sex which made it even worse. I can’t say that it is not a good story because it is, but it was definitely boring to me. I am afraid that this story was definitely not for me.