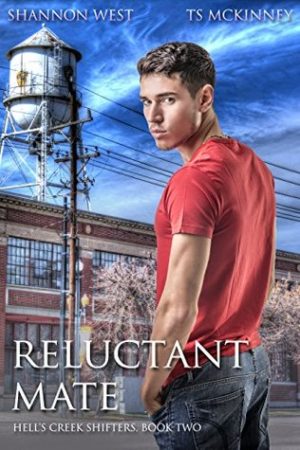 Blurb: Levi was one of the most popular men on campus at his little college located in the north Georgia hills. In the three years since his small group of friends left the little mill village called Hell’s Creek to venture out into the ‘real’ world, he’s watched as each of them has grown more carefree and happy. They played football and Frisbee, went to their classes and partied hard on the weekends. And none of the other students ever guessed that a small group of shifters has invaded their human world. Life would have been sweet if not for one thing—the one boy on campus that Levi wants to impress hates his guts. Openly, intensely, and with great malice.

Christian has his reasons for not accepting Levi’s endless invitations, and they all have to do with a terminal illness he’s had since he was a child. When Christian goes camping one weekend with a friend, he’s hoping he can forget his troubles for a while and relax. It’s working fine, until a huge wolf and a black panther come roaring out of the forest and straight at him. Christian faints and when he wakes up, finds that Levi has taken him to his home in Hell’s Creek. The strange inhabitants of the town all believe they can turn into animals. And people are telling him over and over again that he can’t leave, because he’s seen too much. Worst of all, the more time he spends with the gorgeous Levi, the healthier he’s beginning to feel and the more he’s beginning to fall for him. Is there really something in the water like everyone tells him? Or is he just going as crazy as they all are?

Will the secret that Hell’s Creek has been hiding finally be revealed? Christian has to find a way out of town before it’s too late, and before he falls hopelessly and irrevocably in love.

Review: Each book in the Hell’s Creek collection features a new romantic couple. To enjoy the overall story arc and crossover characters, I would recommend reading the series in sequential order.

Men and their evil creations have been shown once more. They created small towns, full of poison and kept their people prisoner. You try to leave and you die. If you are different the human religious nutcases kill you. Christian was told when he was younger that he was going to die from a blood disease. It was what let him go to college, to live what was left of his life the way he wanted. He wanted to drink his way out. That is until he see’s Levi. A man who was everything he was not.

Levi saw Christian and wanted him. Levi is a shifter whose town was trying to combat what had been done to him. He had not really believed in fated mates, but Christian was his. Now all he had to do is to show him. I just don’t think the way he did it was the way he intended.

Once I started reading this, book one came right back to me. It caught my attention from the start and kept if all the way to the end. I loved the characters but damn if they are not cranky or quirky. I enjoyed the fact that a wolf and a cat were mated. In fact it made me laugh a bit. It has a serious tone to it but it was even with the other feelings in it.

I had a lot of fun reading this and can guarantee that you will enjoy it. This is one story I would recommend.