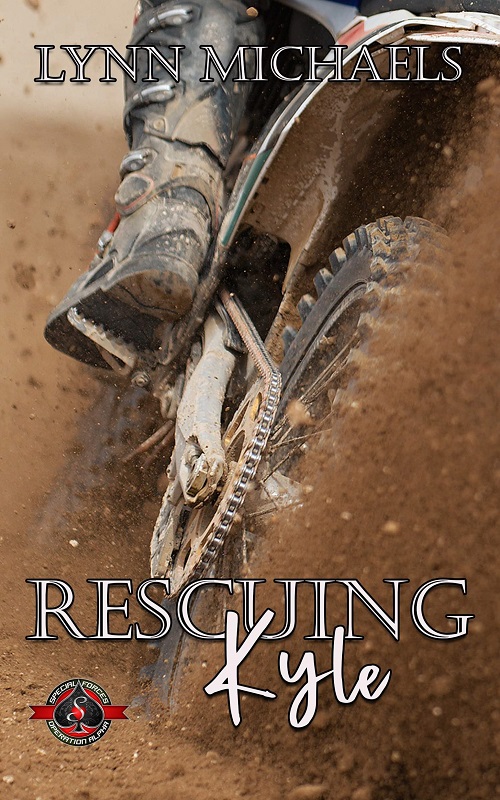 Kyle Blyss lives to tear up the track on his motorcycle, and touring across Europe is unbelievable. Meeting up with his cousin, an Army Ranger, who he looks a lot like, only adds to his adventure. When he meets his cousin’s friends, Kyle is excited by the lust that pulses between him and the sexy CIA agent, and he’s eager to explore the connection.

Steve Dixon always wanted to be a superspy, so he joined the CIA. His current assignment is a counterterrorist joint task force, headquartered in Germany. When he meets his co-worker’s motorcycle riding cousin, he’s overwhelmed at their mutual attraction.

Then everything goes south.

A mistaken identity, the Delta Team rescue, and a bag of gummies lead Kyle and Steve to re-examine their careers, their love…and their lives. Steve tagged along with Warren to pick Kyle up, whether Warren wanted him there or not. Frankfurt airport was a big wide open space with masses of people all going in their own separate directions—a riot of color against a silver backdrop. Steve followed after Warren as he made his way through the hoards. They only stopped moving to check the huge board announcing the flights. “Well?” Steve asked. “Which one?”

Steve couldn’t figure out the flights listed, but Warren picked it out and then moved again without waiting for Steve. He darted after Warren. His heart pounded in his chest as they maneuvered the crowds toward his gate, but that beating had more to do with seeing Kyle, than the exertion of speed walking through the airport. It didn’t matter. He swallowed hard when Warren came to a stop.

“He should be coming from there.” Warren stopped at the farthest point they could go. Steve could have pulled some strings to get them behind the security line, but he felt that needed to be reserved for something special, not simply picking up his boyfriend.

Steve stuffed that thought down. He couldn’t afford to think that way.

He scanned the people coming out of the large tiled hallway and walking past them. All the different faces, different sizes, shapes, and colors, but none of them were Kyle. Steve hated the waiting.

“Stop fidgeting. He’ll be here in a sec,” Warren grumbled.

“Hey, let me ask you something.”

“Sure.” Steve refocused on Warren. His eyebrows crinkled over his nose, making him appear serious. “What is it?” He feared a lecture about screwing around with Warren’s cousin.

Warren took a deep breath and looked away before asking, “Are you like, uh, attracted to me?”

Steve snorted out a laugh. “No. It does not work that way, man. I’m not attracted to you. At. All.”

Warren glared at him. “How is that possible? We look like twins.”

“Come on, Warren. You can’t be serious. Stop yanking my chain.” Steve crossed his arms. “Attraction is more than looks. It’s that zing you get.”

“Fine. Don’t be attracted to me then.”

Warren was probably playing it off as not serious after being told no. “Warren?”

Kyle came running at them. He dropped his bag and leaped into Steve’s arms. Steve grabbed him, holding him tight. That kind of greeting surprised Steve, but he loved it.

“Oh, wow. Now you don’t like me, either. Jerks.” Warren picked up Kyle’s bag. “Feet back on the floor, Romeo. You have any other luggage to collect?”

Kyle put his feet down and pulled away from Steve, then he grabbed Warren in a bear hug. “Missed you too, bro.”

“Bags, Kyle?” Warren choked out the words as if Kyle were strangling him.

“Yeah. I have one coming out. Let’s get to baggage claim.” Kyle grabbed Steve’s hand and tugged him over. He pecked him on the lips, but Steve wanted more. He grabbed Kyle’s face and pulled him into a deeper kiss.

“Oh, no. Knock that shit off.” Warren shoved Kyle, who laughed at him. “Save it for later, boys.”

“Jealous?” Kyle asked with a wink.

Warren flipped him the bird and walked off to find the belt that would soon spit out Kyle’s bag.