Hi guys! We have Aimee Nicole Walker stopping by today with her new release Ride The Lightning, we have a great excerpt, so check out the post and enjoy! ❤️ ~Pixie~ 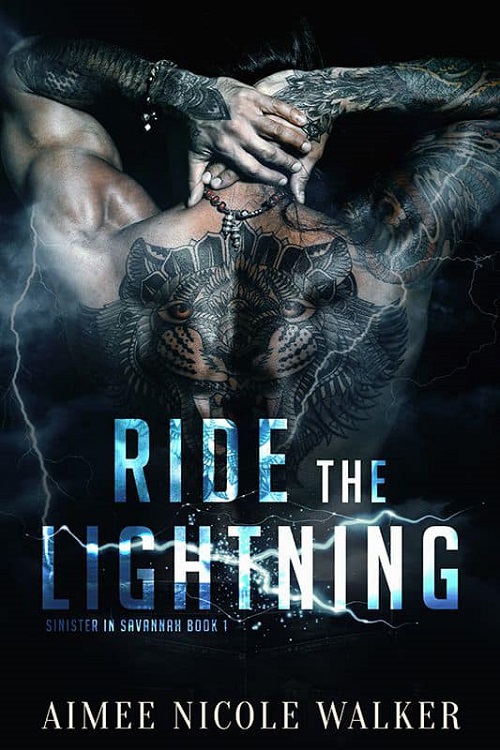 (Sinister In Savannah 01)
by

By day, Jonah St. John is a criminal analyst for the Georgia Bureau of Investigations. By night, he produces Sinister in Savannah, an investigative podcast, with his two best friends. Jonah’s life revolves around three principles: a man’s word is his oath, friendships are priceless gifts, and love is for other people.

When the Sinister in Savannah team delves into the thirty-eight-year-old murder of a drag queen, they quickly discover that the story doesn’t end with the alleged killer’s confession in 1995. Continuing the investigation could have fatal consequences for Jonah and everyone he holds dear, including his irresistible intern.

To love is to lose: a lesson Jonah has learned the hard way. For a decade, he has embraced solitude as his penance for a past mistake. Then came Avery Bradford, a man whose warmth and sunshine infuses Jonah’s battered soul and challenges his resistance. Over the past eight months, Jonah has soared closer and closer to Avery’s flame until the thing he’s feared the most becomes the one he can’t live without.

The chill of danger merges with the heat of desire, forming a deadly superstorm. Will Jonah seek shelter or ride the lightning?

Sinister in Savannah series is a fictional podcast exploring the city’s most nefarious crimes with Southern-fried snark. The books explore friendship, love, loss, and the irrepressible human spirit. Ride the Lightning is book one of three. While each book is written about a different couple, the series should be read in order. Sinister in Savannah is an LGBT romantic suspense series with mature language and sexual content intended for adults eighteen and older. “Who is Dirty Harry?” Dakota asked.

“It’s a movie franchise starring Clint Eastwood. Mr. Ling just performed some of the iconic lines from it.”

“Never heard of him,” SWG said.

Awareness sparked in Dakota’s blue eyes. “Oh, I know him.”

“He’s not that kind of cop,” Mr. Ling said as he rejoined them. He tapped his temples, and Dakota looked even more confused . “Uses brain to catch bad guys instead of a gun.”

Jonah could happily go the rest of his life without holding a gun, let alone shooting one.

“I’m a criminal intelligence analyst,” Jonah explained. “I have to take all the same training and certifications as the field agents, but my position doesn’t require me to carry a gun.”

Jonah wasn’t in the mood to correct the kid’s assumptions, so he said, “Something like that.” Ever since she was a little girl, Aimee Nicole Walker entertained herself with stories that popped into her head. Now she gets paid to tell those stories to other people. She wears many titles—wife, mom, and animal lover are just a few of them. Her absolute favorite title is champion of the happily ever after. Love inspires everything she does, music keeps her sane, and coffee is the magic elixir that fuels her day. I’d love to hear from you